As I have said on many occasions, both on this blog and in many a conversation, this is truly a Golden Age for beer in the UK. You can walk into lots of bars / pubs around the country and sample exceptional beers from far and wide. For that, drinkers should rejoice.

However, I am increasingly conscious of the amount of comment given to beers from outside of the UK. Be they from the USA, Belgium, Germany, Italy or wherever, these undoubtedly excellent beers get praised to the clouds. But there is an absolute wealth of beers being brewed by small micros in this country that are superb in their own right. Also many of which are not in thrall to American techniques or styles.

I don’t want to be misunderstood, I adore good beer wherever it may be sourced from. As you will see below, one of the best beers I’ve had recently was made by Sierra Nevada in California. But there is THAT much excellent beer being brewed by UK micros (yes, many using New World hops in many instances!), that that is where my future focus will be when I review bottles. UK Microbreweries.

With my recent visits to both Yorkshire Ales of Snaith and Bierhuis of Ossett, it’s obvious to me that I’ve barely scratched the surface of the number of breweries in one county alone, Yorkshire. I won’t be able to try them all. But I’ll have a bash!

There. Now here’s some belters that I’ve drunk recently……. The format remains the same. I give you the beer, who brews it and where, the alcoholic strength, the style of beer, where I bought if from, bottle size and how much I paid for it. Simples! 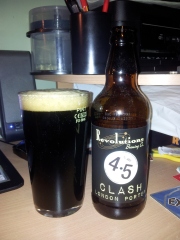 I like the ethos of Revolutions. “Music-inspired beer. Craft brewed in Yorkshire”. All of their beers have a musical themed name. They also brew to abv strength associated with music formats. 3.3% (33 rpm), 4.5% (45 rpm), 6.0% (C60 cassette) etc…. So before I taste the beer, I’m favourably disposed. My first bottle I tried was the Manifesto Strong Stout. That was my bottle of the month in April. Could this live up to that standard?

A slightly sweet coffee aroma to this dark ruby coloured beer. Cream coloured head. Some coffee flavour from the roasted malts, smooth in the mouth and a nice hoppy dryness in the finish. The finish was redolent of a good IPA in its dryness with some hoppy grassy tones. A superb beer that I would put as a dark beer for IPA lovers wanting to visit The Dark Side, like a porter with an IPA touch. A 4.5 beer (The Manifesto was a 5 – I’ve already started a campaign to get a firkin or 2 of that over here!) 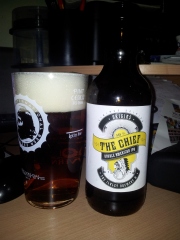 It’s good to see an increasing number of Ilkley beers ‘over the hill’ now. Booths stock a good range and I even saw Mary Jane at Sainsbury in Bolton today. Things are looking up for Ilkley lovers! However, unless you live in Manchester city centre and can pop into Beermoth on Tib Street, you won’t get some of their ‘specials’. However, this doesn’t appear to be a problem for specialist beer retailers in Yorkshire. On a recent camping trip, I was advised by the owner of Bierhuis (David) that I was only about 20 mins away. How COULD I resist? It was here that I picked up this beer up (David put a couple aside for me).

This beer was a rich gold (almost bronze) colour and had an aroma of boiled sweets, very fruity with a touch of (what I thought was) Belgian yeasty funk. This beer kicked off when it got in the mouth! WOW! Incredibly hoppy (DOUBLE IPA remember) Apricot flavour in there for sure, mango maybe? A piney resinous hoppyness in a very bitter finish. Lip smackingly good. A fabulous beer that was worth every penny of that price! (4.5 SO nearly a 5!) 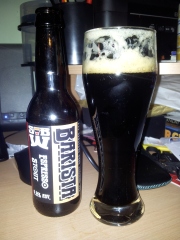 I drink this almost everywhere I see it on draught. A great beer. But I’d never had it in bottle. So, when I saw an offer of 6 assorted bottles for £18 at Port Street one hazy evening, what was I to do?

This was another lively devil on pouring. A tan coloured head gave off an aroma just like when you tear open a packet of ground coffee. Just like that! But with a hint of spicyness. A lovely smooth texture in the mouth where those coffee flavours came to the fore but with a little touch of roasted malt sweetness. I love this beer on draught and the same applies with the bottled version. Another 4.5 beer! 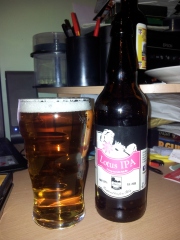 Not being bottle conditioned, I was surprised by the liveliness of this beastie. Golden, with an abundance of grapefruit citrus zing on the nose. In the mouth, this was more balanced than the aroma hinted at. Grapefruit yes, but mellower and balanced with a malty digestive biscuit like sweetness. As smooth as cream in the mouth with a dry grassy bitter finish. This gets a 5 rating on value alone! Superb. Thank you Bierhuis! 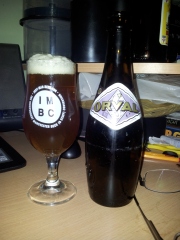 Confession. I had never had an Orval prior to this.

Another lively beast. This russet coloured beer had an incredibly jammy fruit nose with, perhaps, a hint of rhubarb. In the mouth there was the expected Belgian yeasty tones, but with an array of flavours at different stages. Firstly stewed apples and pears and a pear drop sweet flavour. Later on, there was a warming almost medicinal linctus tone which was surprising to me in a 6.2% beer. Initially underwhelmed, by the bottom of the glass I was a convert. A truly lovely beer. (4.5)

Somewhere beyond black, there is a darker hue. This beer is even darker than that. If sin is this black, I don’t ever want to be virtuous! I opened the bottle and sniffed. Boozy port and spice. I poured it into my new 2/3 pint glass (for which I’m VERY thankful)  to further wallow in those aromas. A milk coffee coloured head, beneath which lurked a REALLY bitter chocolate flavour allied to a vinous warmth. There were touches of licorice root with sweet espresso and a glorious dry bitter spicy finish. To say this beer is “up my street” doesn’t even come close! 5 out of 5! (I’d give it 10 if I could!)

At THAT price, I felt  like I’d stolen it! Again, thank you Bierhuis!

Given what I said at the top, these may be the last couple of non-UK beers I review in a while. But what a pair to go out on, eh? 5 out of 5

Beer Of The Month

Bottled – As if you hadn’t guessed! Narwhal by Sierra Nevada. For the reasons stated above. A superb Imperial Stout.

Draught – Imperial Black (Black IPA) by Buxton Brewery 7.5% abv (Port Street Beer House 26/05/2013). I am incredibly grateful to Jamie H that he got 4 halves of this out of the end of the cask! Smooth as silk, black as sin. Incredibly fruity whilst still having some roasted stuff in there. This was an awesome beer. I will drink it wherever I find it. It is THAT good!

On that excited note……’til next time!