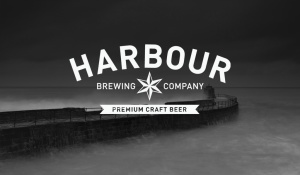 Let’s start this post with my usual disarming honesty. Until recently, I hadn’t had much by Harbour. I may have had a Pale at The Euston Tap, but little else. Most of what I had heard about Harbour was good. Amongst my closer victims (er…sorry…friends!), they had a seriously good reputation. I was, therefore, rather happy when I saw two of their beers featuring in the Sainsbury Great British Beer Hunt!

Those two beers were the IPA and Porter #6. They were truly superb and two of my favourites of the 12 or so that I bought (https://beersmanchester.wordpress.com/2013/09/24/sainsbury-great-british-beer-hunt-2013/) so when I saw that they were doing an MTB at Port Street, I had to go, didn’t I?

Brewing started in 2012. Rhys Powell (Brewer – formerly of Sharps in rock, Cornwall) and Eddie Lofthouse (business side – formerly running the family hotel in Polzeath) came together over shared love of beer and surfing…(cue gratuious surfboard pic!)… 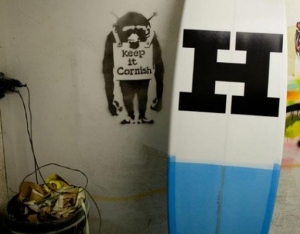 ….they use a 10Bbl brew kit with a number of fermenting vessels (4 if I remember rightly). They supply their beer all over the country. Sounds like we get so much of it because, with St Austell controlling many of the pubs in the county, the locals drink lots of brown (relatively) boring stuff!

Getting a ticket for this however, proved somewhat easier than getting there! After catching 4 (FOUR) buses – something to do with leaving my ticket at home! – I finally got to PSBH with just a minute or so to spare. Fortunately, the ever considerate Arch-Nemesis had already lined up the first beer of the evening….

Light Ale #2 (cask) – 3.5% abv – A copper coloured beer with a subtle grapefruit aroma. Light bodied but with some malt toffee notes and lovely marmalade orangey citrus hoppy freshness. Full of hoppy goodness, this was a really light refreshing start and – to be honest – my idea of a session beer. I could happily drink this all night! But then….along comes the next beer……

Aji Limon Pale Ale (cask) – 6% abv – Rhys (Brewer) introduced this as a variation on one of their standard beers (Pale Ale). The variation being that it was barrel aged for 6 or 7 weeks over Aji Limon chillies, not the hottest of capsicums, the aim being to bring a lemony lime citrus note to the beer with a building warmth the further down the glass you go. 6  weeks or so being optimal, before the heat builds too much. Hopped with Citra, Centennial & Chinook with a touch of Crystal malt for a sweet note. 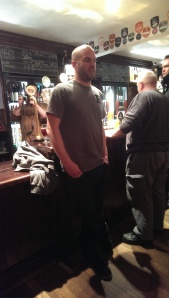 Pale gold with a lemon and more gentle mandarin citrus aroma, this beer had more bready backbone to it. Some lovely lemon citrus in this with a bit of paler fruit, maybe melon? Rhys was right too. The further down the glass you got, the warmth increased but was never overwhelming. A lovely pale beer and certainly the best beer that I’ve had that has used chillies.

Double IPA (keg) – 7.2% abv – Introduced by Rhys as the big brother of the Pale Ale upon which the Aji Limon was based. Pale lager malt, Citra, Centennial & Chinook (accent on Centennial). The aim with this being to showcase the hops. Like several brewers, Rhys prefers this kind of beer on keg, his thinking being that without the carbonation, the beer could be cloying. Not sure I agree with that, I’d love to try this on cask!

Had to let this warm a bit (being kegged). Hazy gold beer, big hoppy nose once it warmed a touch, a slight malty sweetness pushed out of the way by some seriously big grassy hops. Nicely big and bitter, really hoppy with a huge resinous grassy finish.

Then….my higlight (or even “highlight”!) of the evening….

Porter #1 – 5.5% abv – Rhys’ interpretation of what an 18th Century London Porter may have tasted like. More upping of the malt bass and a tuning down of the hoppy treble on this number. A lot of brown malt. Describer as Rhys as having more sweetness with lots of coffee notes. Eddie (having arrived by now) made an excelloent point about the use of a sparkler on the pump (something that may not be prevalent down there in Kernow!) with Rhys noting the “Guinness” like appearance (underselling it – in my opinion!). Although they had Porter #6 in the GBBH, they have only done 5 with #5 not actually having been brewed yet. The #6 being like a big brother to #1, although (contrary to a Rhys quip!) I’m sure they didn’t up it to 6.8% with the addition of vodka!!! 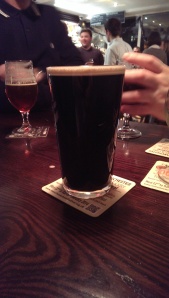 My beer of the evening, this. A deepest ruby coloured beer with a fabulous creamy head in both colour and texture. A gentle creamy coffee aroma gave way to a fabulously smooth roasted experience with cafe au lait, some dark toffee notes and a gentle building bitterness. I can’t say if it’s a great example of an 18th century Porter, but it sure as hell works for me in the 21st! The best Porter I’ve had in a long while – and I LIKE Porters! 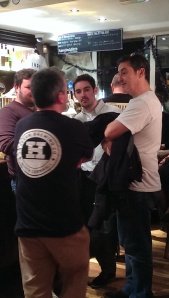 (Eddie shoots the breeze with the punters)

Then we came to the final beer of the evening. Generally, the beers at these events sign off with a relatively big beer. This was no exception.

Imperial Chocolate Stout – 8.5% abv (keg) – This beer was as black as sin with the cream coloured head dissipating quite quickly with an aroma of bozzy bitter chocolate. Lots of bitter chocolate in the mouth and a vanilla note with a boozy port wine feel. I detected some blackcurrant and cranberry in their too before a really nice dry grassy finish. Another belter.

There was a bit of a discussion about the availability of their beers on draught in their own area. The shame being, with the predominance of the likes of St Austell, Sharps & Skinners, the tastes appear to be for boring brown and amber beers, to the extent that Rhys has made their own amber for the local market. Price is also a big issue with outlets seeking the lowest possible. This may account for why so much of their beer makes its way across “the border”! I, for one, am not complaining!!!

Their was also a surprising yet pleasant afternote to the Sainsbury competition. Harbour will be having their Porter and India Pale Ale in over 250 Sainsbury outlets. Despite not being one of the winners! Just goes to show, quality (sometimes) does shine through!

Another excellent evening at Port Street with good friends and superb beer. They do do this thing quite well on Port Street. Met a nice couple from Ashton – Malcolm & Hazel – Hazel kept passing us her beer, bit too strong I think. Not that WE were complaining, Oh No!

After a brief (possibly sozzled on my part!) chat with Eddie from Harbour and Claudia from the Port Street empire, it was time for walkies with a couple of pleasant pints in The Castle (that REALLY is a nice job they’ve done reclaiming the upstairs room!) and the gorgeous Crown & Kettle. All over too soon.

Just wish we had got those damn tickets for the Kernel MTB when we could!

On that note…’til next time…