(“Oh Manchester, so much to answer for”)

“It seems, to me, to be self-contradictory

It seems, to me, you count your blessings while they’re there”

(“In Shreds” – The Chameleons)

With all of this drinking malarkey, one can often just “Go With The Flow” and just drink great beer from wherever it may emanate, but it has struck me recently how little Manchester brewed bottled ale I have been drinking recently. This was brought sharply into my focus when I saw a post from Brightside (now) of Radcliffe – and now my closest micro! – that they had commenced bottling their ale. I was, to put it mildly, rather excited.

Most of the beers that I have been prattling on about have, I realised, been from either Yorkshire or that there London. High time for something more…local. I don’t often take home beer from my frequent Manchester jaunts, so it was a joy to locate a shop – not too far from me – which was starting to sell not only great bottled ale, but, increasingly, great bottled ale from the Manchester area. That place is The Liquor Shop on Bury Old Rd, Whitefield (150 yds from Besses O’Th Barn Metro stop). Stocking beers from as diverse brewers as The Kernel, Mad Hatter and Wilson Potter, Raj has started to build a really good range. Very competitively priced too! A friendly guy who likes his beers, he offers a 10% discount on 12 or more bottles (15% on 24!) too.

Over half of the beers below were sourced from his wee shop (the others being sourced directly from the brewers themselves). If you live in Central or North Manchester, pay him a visit, you’ll thank me!

If you have ever read one of these before, you will know what is comes next!……The format remains….

1. The Beer, 2. The Brewer, 3. The Strength, 4. The beer style, 5. The Price & Size (including discount, eg: for CAMRA membership, where applicable). 6. Where from, and, If a website for the vendor exists, the hyperlink to the shop / brewer website, just in case you are inspired enough by my ramblings to make a purchase! Here goes… 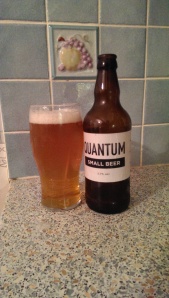 Wow. Then, more wow! My good friend Colin & I had this on cask at Port Street last month and it rocked our worlds! I don’t know how brewers can make a beer this light in Alcohol, so bloody tasty! (OK, yeah, I know it’s the hops – Magnum, Columbus, Cluster, Citra & Chinook, in this case – but you know what I mean!) And without making it insipid? It’s MAGIC! Well…back to one of favourite Alechemists…Mr Krause!

First, the label. Classy and minimal. Tells you what it is and lists the dry goods (hops & malts) on the side. An example to many.A golden beer with an abundant white head which quickly settled. Abundant aromas of mango and pineapple flying from the glass , a fruity delight. In the mouth? This is light bodied (as you would expect at the strength), there is a little underpinning light biscuit sweet note to support those wonderful hops! Mango, grapefruit and orange fruit danced on my tongue leading to a fabulous bitter fruity finish with lots of pine staying on in the aftertaste. A cracking beer from Jay. Can’t wait to crack the Smoked Imperial Treacle Stout! 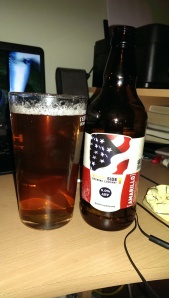 Starting off behind a baker’s shop in Bury, these fine people are now my closest micro brewer, having relocated brewing operations to Radcliffe. In all honesty, it was their announcement that they had commenced bottling their ales, that made me think of a Manchester beer post!

This beer was a recent award winner at the SIBA NW Festival held at Staveley recently on cask …. having not had it at all, I was keen to taste this bottle.

Golden to bronze coloured with a fluffy white head giving up some serious citrus aromas. Bitter orange and tangerine contributing to an almost marmalade like nose. Biscuit sweetness supports the marmalade orange citrus in the mouth. This slides into a crackling bitterness and dry finish with an aftertaste with some more fruit yet distinctive piney tones. A cracking first bottle for me. More please! 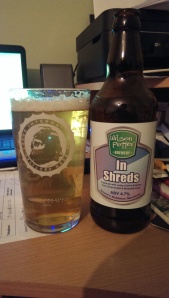 I’ve written of my love for the beers that Amanda & Kathryn make on a number of occasions, but hadn’t had much recently. Weekend before last, I had the briefest of opportunities to pop up to the brewery and have the quickest of chats over a couple of halves, of which, this was one. A bitter hoppy delight it was too. So I snapped up one of their 3 for £7 boxes, including this beer.

Hopped with NZ hops (Green Bullet & Motueka), this was mid-gold coloured with a full white head and the bitter citrus aromas of lemon & lime just leaping out of the glass. A gorgeous zesty bitter mouthful with more lemon & lime followed by a bracing bitterness and a resinous, dry grassy finish. At the strength, a really refreshing bitter hoppy brew this. I like WPs beers, but this could be their best so far. A cracker! (And, to my joy, a music reference too. In Shreds was one of my favourite tracks from the excellent Chameleons, a band formed in the 80s from Middleton. Many a night dancing on beer sodden floors……..zzzzzz……check out Up The Down Escalator, my personal favourite track!) 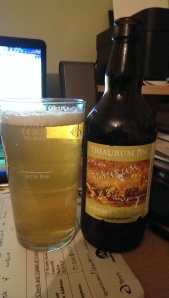 I (somewhat cheekily) invited myself up to see Matt Holmes in June this year (read here) and observed his grafting (and crafting!) at first hand, sampling a bottle or two and taking some home. This was from that batch and was found lurking, buried in my – growing – stash. Rescuing it from the box……

A hazy and pale golden beer this with a white head and a subtle sweet grapefruit aroma minglred (or even “mingled”!) in with some fresh mown grass (not bad for November!) Medium bodied, this had some tart lemon notes in with the still present grapefruit leading balanced on a nice bready malt base. A really refreshing beer this with a dry, grassy bitter finish. Makes some damn nice beers does Matt – try get hold of his Thai Witbeer if you can! 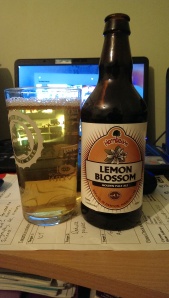 Picked this up at a recent (unfortunately sparsely attended) MTB at The Salford Arms. Kevin the brewer was a most genial host and this was among the many bottles we sampled that evening. Not a brewer I had had much from at that point, but with lovely balanced tasty beers like this, I certainly won’t be overlooking them on any bar now.

Such a pale gold as to be almost colourless! White head giving up subtle yet distinct lemony aromas (from the Sorachi Ace hops) allied with some grassy notes. Light to medium bodied with some zesty lemon in the mouth swiftly drying the mush with a lovely dry bitterness. Delicate and refreshing this. No hop monster, but all the better for it. A belting light refreshing beer that I could happily drink all night. 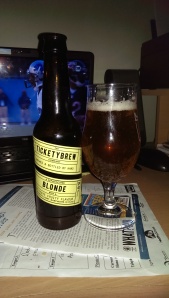 You’ve just got to LOVE that label design haven’t you. Never seen anything like it on a bottle. So distinctive, beautiful.

The beer? Another one I picked up from Raj on my first visit to his Whitefield emporium, golden yet verging on copper coloured, this was lively with a white head and that Belgian yeasty funk that comes from their house yeast with a bit of cream soda in there too. The cream soda-ish notes came through in the mouth along with some banana (that yeast again!) and some more fruity notes. A nice dry finish with a little grassyness staying on. Another nice beer from this Stalybridge brewer. Now just need to try some on draught! 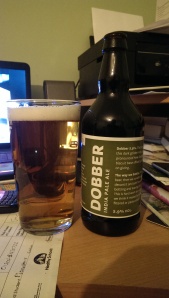 As a kid – playing marbles or “alleys” in the street – Dobbers were the big beast of the marble jungle, highly prized. However, I rarely had a big one (story of my life, really!) and had to make do with “glassies” and “cat’s eyes”. This beer, in keeping with my understanding of the word, is described as “the biggest Marble in the pack”. Whatever, it most certainly is a big beer for this strength (&, to my shame, a Marble I was yet to sample!)

Deepest gold beer with a lasting white head giving up HUGE aromas of mango and peach! Big malty bready body supporting loads of fruity hop muscle. More mango and bitter grapefruit in the mouth, partying away and abusing my tongue, beating it into passive submission to the hops! I gave myself up to the big bitter resinous finish and collapsed, whimpering. I have absolutely NO idea why I hadn’t had this beer yet, but I want more!

As I pick up more local bottles, I will post more Manchester only items, just need more beer shops to stock local beers really. Raj appears to be doing OK, others just need to take the hint really!

Anyway, enough of my blatherings. Time for bed!