“On the pad before my eyes, paper cries, tellin’ lies.

The promises you gave from the grave of a broken heart. Hmmm

Every day I spend my time, drinkin’ wine, feelin’ fine,

Waitin’ here to find the sign that I can understand,

This song was originally released in 1970, but by the time of its UK re-release in 1972, Rod Stewart was banging out some of the finest blues-rock singles of the age, songs that MORE than stand the test of time, even now. “Maggie May”, “Reason To Believe”, “Handbags & Gladrags”, “You Wear It Well” not to mention the all-time classic single “Stay With Me” that he recorded as a member of possibly the most lashed up and lashed together of all rock and roll bands “The Faces”. Pistols at dawn for anybody who denies the greatness of that run of classics! To think that he was paid for his vocal on my featured lyric….with a set of seat covers for his car!

Anyway, down to business…..that being BEER of course…..

If you have ever read one of these before, you will know what is comes next!……The format remains….

1. The Beer, 2. The Brewer, 3. The Strength, 4. The beer style, 5. The Price & Size (including discount, eg: for CAMRA membership, where applicable – if I can remember the price of course!). 6. Where from,  and, If a website for the vendor exists, the hyperlink to the shop / brewer website, just in case you are inspired enough by my ramblings to make a purchase! Here goes…

This is another of the batch that I received unexpectedly in the post. Sometimes, I can’t believe my luck!

Liquid ebony to the eye and twice as pretty! A light cream coloured head yielding an aroma containing deep dark bitter chocolate and some nose wrinkling spicy hop? Ooohhh! In the mouth this is full-bodied (as you would expect), but far from glutinous. A perfect balance of sweet & bitter. Licorice, bitter chocolate, a touch of cognac, and sweet strong coffee assail the taste-buds  and give the insides of the belly a warm luxurious massage! Licorice and chocolate linger into the finish with quite a hoppy perky aftertaste. I love Brodies Prime, but this is EVEN better!

Damn! I could have used the lyric from the classic Bobby Pickett & The Cryptkickers for the header (“I was working in the lab late one night, when my eyes beheld an eerie sight…”)

OK, I’ll get on with it….. Dark brown almost black was this puppy, with a creamy tan coloured head and a milk  chocolatey aroma with a hint of sweet coffee. It was full-bodied and creamy in the mouth, with chocolate at first on the tongue, then some bitter coffee and lovely toasty flavours in with the roast. This led to a dry finish with a little bitterness and a lingering coffee note in the aftertaste. Another Wakefield belter from Mr Bastow!

(Now THAT’S what I call Amber!)

The first time that I drank this, was on draught at Port Street Beer House. Astonishingly good (as have been all of Jay’s beers that I have tried), it was somewhat darker than anything resembling amber, buy BOY did it taste good! But in bottle?

No worries there! Yup! It’s an amber coloured beer alright, with a white head and a big citrussy aroma, the dominant whiffs being tangerine and peach. Full bodied and really fruity (tangerine, tart grapefruit) with a bready malt base supporting those fruity hops (all SEVEN) and rounded off with a nicely bitter finish and an aftertaste with lingering fruit and sticky piney resins. Yet another superb beer from the Hempshore Lane laboratory! 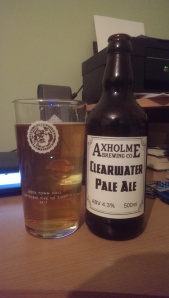 A brewery whose beers can be found rarely but increasingly in certain select pubs like The New Oxford in Salford, Mike & Jules Richards create some fine beers, but like many smaller brewers, rarely find their way this neck of the woods. Shame really!

Pale gold with ever such a light haze and an aroma yielding  some peach and maybe grape to the nose. Medium bodied and lacking a little in carbonation, but really refreshing with almost a cask feel to it. Quite dry with peach and tangerine flavours to the fore giving way to quite a dry finish, with a gentle bitterness at the back of the tongue. A nice beer from the North of Lincolnshire.

About a year ago, I had never even HEARD the term “Black IPA” never mind tasted one! And now……Black is indeed the new Pale! This was a Beavertown beer that I’d heard loads of good verbage about, but was yet to try…..

Black with a chocolate-brown tinge at the head when held up to the light, the head is a tan colour but quickly faded to traces, giving up a powerful citrus aroma of grapefruit mingled with something earthier and spicier like licorice root. Making this old boy’s saliva glands go into overdrive! Once it passes the lips it is like a dark grenade! In the mouth the citrus is peach and mandarin and really sharp, with the carbonation enhancing the tingling of the gums. Entwined with that – like a vine – is that licorice again with a bitter chocolate note. This is the first time that I have had this beer in any form and it is bloody marvellous! A superb balance of sweetness and hoppy bitterness and resins. The finish is dry and bitter with lingering pine and bitter chocolate. A class act! 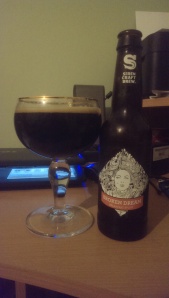 I popped in this afternoon whilst in Bolton and had a superb pint of Deeply Vale DV8 (funnily enough, another Breakfast Stout) and it was great to see Dan & Gina doing well in their brave but welcome (ad)venture. Some MTBs coming up too!

Dan passed me this to see what I thought (knowing my love of most things dark!) and I am so glad he did!

A true stout. Black and opaque, a dark tan creamy head with an aroma of mocha with memories of chocolate flavoured ice cream sauce topping! Mmmm….Full bodied and ever so chocolatey! Really creamy and smooth on the tongue. The chocolate fades (if that is the right word) into more of a mocha feel with coffee increasingly making its eye-opening presence felt. The mocha sweetness is balanced with some nice grassy hopping which comes into play nearer the finish which has a blend of chocolate sweetness and hoppy dryness. I wasn’t that impressed when I tried this at the recent beer fest (unlike their awesome Soundwave), but this is more than a class above. A corker! (And a steal at the price!)

Being a total empty head, I forgot my beers of the month for January….so here goes….

Draught – Amarillo – Brightside Brewing (Radcliffe, Gtr Manchester) Pale and VERY interesting, the orangey hop character of the Amarillo shone through in this fruity marvel. A deserves SIBA Gold Medal winner. Apparently, they’re having this on draught at the Great Ale Year Round MTB next week. Can’t wait!!!

That’s enough of my wittering & waffling for one week I think!

PS : (I lied!) Allgates Brewery have brewed more of the luscious Quaker House Oatmeal Stout (My beer of the year 2013!), can’t wait to wrap my chops around that beauty again!