“If I could read your heart and say ‘I love me darlin’,

if I could read your mind and say ‘I’d never leave me’,

There isn’t anything I wouldn’t do for you. I’d give my life away and my heart too, yes I would.

I’d do anything, oh yeah, if you’d just let me love you baby.”

(Tune link courtesy of NutsliteVenueRoma on You Tube)

A most fabulous tune that I have shuffled/wobbled to on many a Northern Soul dance floor. To be fair, until last night (Saturday), I couldn’t see how I would link this greatest of tracks into one of my blog posts. Take a bow Mr Rik Garner, brewer and DJ supreme!

When Connor “Beer Battered” Murphy first mentioned a #CAMRGB Manchester Twissup (Abbreviation of Twitter Piss-Up to the uninitiated!) to me, two feelings came to the fore. Fear and excitement (fellow travellers I suppose). Fear? Well, down to the prospect of meeting lots of people I admire and in whose company I would feel rather inadequate – I’m a bit of a shy soft git (despite a chatty exterior) Excitement? Not a tricky one really! Unfortunately, at the time that Connor wanted to arrange this, I was struggling with some health issues and was unable to contribute. To be honest, I nearly abandoned this blogging malarkey altogether. However, as it transpires, Connor rose to the occasion and sorted a great crawl with some excellent “bonuses”!

(If 30 + years of drinking have taught me anything – Preparation!) 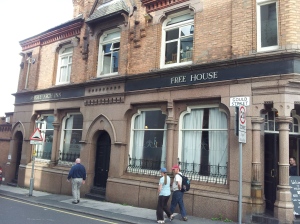 So at 12:15 I find myself stepping into the main room of what is, undoubtedly, the most revered pub in Manchester. The Marble Arch. Dating from 1888 (although there was a pub on the site previously as early as 1851), this immaculately restored pub is an utter gem of gorgeous tiling, stained glass and the legendary sloping floor with an angle to rival the Hardknott Pass!). Worth little of course, if the beer is rubbish (of course!), but the brewery IS Marble and that means quality!

Walking in past one or two blue & white scarves, I felt instantly at home. I hadn’t considered that this might be a pub of choice pre-Etihad! Spying Connor, I engaged in a rather shady hand-over, the likes of which you might see in an old episode of “Tinker Tailor, Soldier, Spy”! So, replete with some of Connors highly rated “home-brew” (a phrase that is now a world away from tins of Muntons Malt Extract!), I hustled to the bar for something light and tasty. Pint most certainly fulfilled that need and more, with its lightish body, pale good looks and zingy grapefruit and lemon. Delicious.

A this point some introductions were being made and I met a number of people I only know from Twitter, like Andy Heggs (HopOnTheBike), Dave Harrison-Ward (Brews Implosion), Mark (ViewsFromTheBar) from Scarborough, Andy Tabbernacle (TheComedyBeerCyclist) and his rather tall mate John, and many others whose names I shall be embarrassed to ask next time I meet them, my memory is SO shit! The mighty Al from Port Street was in attendance too and it was great to see Paddy McGrath (AllBeerNoBelly), a previous boon companion and somebody I never tire of reading/chatting with.

Then the boss lady of The Arch showed up with a number of bottles of Imperial Stout! Oh dear….this was going to get MESSY! A VERY generous gesture indeed! Oily, black, smooth as a baby’s powdered bottom. Warming bitter coffee, cognac, dark fruits….just delightful, but bloody dangerous at this early stage! Beergasm over, then a couple of swift halves of Experimental 701 and Inter Regnum both lowish abv (4.2 & 3.4% respectively), both really refreshing with slight preference for the Inter Regnum, a hoppy brown ale.

Early yesterday, the evil genius and aspiring Nijinsky that is Rob Hamilton posted an image of Twitter. The bar that awaited us!

I like Rob & the beers that he brews. A lot. Clean, tasty and never flashy, some of the consistently best beers you’ll find around Manchester. The brewery is located in an arch at the bottom end of Gould Street from The Marble Arch. Bottom end being appropriate, that slope gets steep! 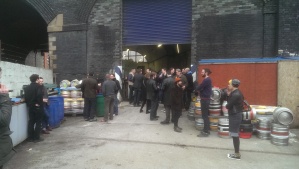 He had a good few beers on did Rob, I went for his Stout and Bramling Cross Pale (being a coward. I chose to give the slopey shoulder to the Arbor/Alechemy collab!). The Bramling Cross was refreshing, slightly bitter with a light earthy hop character and a nice fruitiness. The Stout was gorgeous dark and roasted with some coffee and dark fruit. Right up mein strasse! Had a great gab with Mr Heggs (liberating some of his pin badges – classy little things as were his designed T-Shirt for the Website! XL Please!) Thought I saw Rik “First Chop” Garner earlier too! Or was it a mirage!

This was self-service with style and the honesty “box” soon filled up as the assembled (and rapidly growing) throng offered libation after libation to Bacchus. The Arch-Nemesis joined us at this point and was one of many who set about the Arbor/Alechemy whilst Paddy and I enjoyed a cracking hoppy bottle of Redchurch IPA with an incredibly creative “Best Before Date” that had to mean that the beer could never go off, 30/02/2014 is a date that it could never reach!

The throng was heading off in sizeable chunks toward the next destination. I had advocated the chippy on Tib Street as a good idea, but damn if it wasn’t shut! Paddy, feeling slightly peckish, headed off to Slice whilst I bee-lined for Port Street! 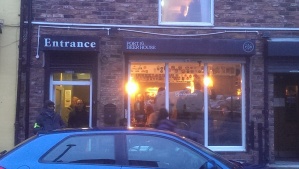 Boy was it busy! Memory was getting slightly hazy at this point, but I did have a half of the cracking Soulless by Redwillow, their Black IPA. A beautiful hoppy creamy mouthful. Full of grapefruit hop and roasted coffee and choc goodness. First time on cask for me and right up with Buxton Imperial Black in my book! The conversation was flowing with beery wisdoms being freely exchanged, but I had a yearning for a slight diversion with the next  destination being set for Font for the beery locust swarm!

Paddy had never been to Joshua Brooks. It so happened that the yearning to pop in was front and centre of my feeble mind! So Paddy, Arch-Nemesis & I were soon at that Junction of Charles & Princess Streets. It was here that I had my pint of the day, Beat Box by Tiny Rebel. A fruity and hoppy pale marvel at less than 5% abv (I think!), memories of orange and tangerine? Bloody good beer. Had my first taste of Burning Sky in here too with their Pale Ale another cracking citrussy pint! Nice to see Jon Turner before he leaves to move to London. Top bloke. Hoping that the beer selection stays as good as this! (Do yourselves a favour and buy one of their Membership Cards. £3 and gives a HUGE discount on the Cask Conditioned ales!

Then, the long hike! For some of the swarm, a taxi was order of the day, but for flabby guts here, I needed the walk! Swatting away the devil on my shoulder which told me to pop into Cask, a thirst had been built by the time we entered the arch containing First Chop Brewing Arm. The arch is bloody HUGE! With the bar on the left on entry (having passed the wood fired pizza seller) a short walk down a corridor (masking off the brewing kit) takes you into another enormous space housing a DJ area (Rik himself) and a stage for live performance. The moment I heard “Inner City Blues” by Marvin Gaye, I just KNEW I was gonna enjoy this!

The rather fresh and zippy SIP was going down a treat too, soon to be followed by a MIA, then another SIP. But here, the tunes just ruled! Marvin Gaye, Nolan Porter (see above) I was just swaying to the bass until that damned man Mr Hamilton dragged me onto the floor! I must have been wobbling like a drunken elephant (whilst thinking I was moving like Fred Astaire!) Just proper good times! Nice to see Jeff and his brother Paul at this point.

All good things……the bus was calling.

To all those I spoke with : Thank you for humouring a waffling old git!

To those whose names I will have to ask for again : Sorry, my memory really IS that poor! But I enjoyed EVERY conversation I had. I had such a great time and loved every god damned minute of the day! Thanks to The Marble Arch, Rob Hamilton (Groovy Mover), Jon Turner (JB), Font and Rik Garner and the guys at First Chop for capping off a memorable day with great beer and even better tuneage. Big thanks to Paddy & Jaz for humouring me more than most!

To Shane Swindells (Cheshire Brewhouse) DAMN! How did I miss you!

To Michelle (Offbeat), Andy & John – Damned sorry about the chippy! I owe you all a Babbies Yed!

To Simon Williams : Damn, didn’t chat enough. Don’t forget Joshua Brooks as a potential venue for the band in Manchester!

So, off to the number 37, the Beach House album Bloom and, surprisingly, no hangover! That’s good beer for you!

On that thought….’til next time…

Reflections? Connor. A (expletive deleted) good job, really well done. Pulled off with (almost) military precision. And, should you tire of your current job, there MUST be some town looking for a Town Crier! I speak for many when I say, Thank You! The End! (No, really!)