“They say no news is good news, the little girl wants information,

(Video courtesy of “jjarcos1v” on You Tube

I bought my first 3 vinyl 7″ singles at the age of 13 with 2 £1 notes (remember them???) I found soggily stuck to the road during my morning paper round. I think (well, it WAS 35 years ago) I bought them at a shop on Salford precinct. They were…..

I Don’t Wanna Go To Chelsea – Elvis Costello & The Attractions; What A Waste – Ian Dury & The Blockheads & Jocko Homo – DEVO. I’m rather proud of those being my first! No “Birdy Song” here….oh no!

As I got older, my love of the music of Declan MacManus (Mr Costello) has grown and deepened. In my opinion (Isn’t that all that blogs are…Opinion?) his greatest album remains one of his more obscure, in that it lacked an obvious hit single. The album I refer to is Imperial Bedroom. You Little Fool was the lead single (there were only 2) and reached #52 in the UK whilst the album reached #6 (#30 in the US, where Costello is more revered than he is here). From the multi-layered and somewhat schizoid opener “Beyond Belief” through “Shabby Doll”, “You Little Fool” all the way to the utterly beautiful “Town Crier” the album remains in my all time lists, certainly within the Top 20 (I really must list them in one of my Hornbyesque moments!)

Costello is still, for me, one of the greatest lyricists writing in the English language. I haven’t seen him live since the Mighty Like A Rose tour. Something I would like to address. He remains a superb live performer. (Still plays “You Little Fool” too!)

Moving swiftly on this Friday evening to the subject at hand. Beer. In bottles no less!

If you have ever read one of these before, you will know what comes next! If you haven’t……The format remains….

1. The Beer, 2. The Brewer, 3. The Strength, 4. The beer style, 5. The Price & Size (including discount, eg: for CAMRA membership or shop deal, where applicable – if I can remember the price of course!). 6. Where from,  and, If a website for the vendor exists, the hyperlink to the shop / brewer website, just in case you are inspired enough by my ramblings to make a purchase! Here goes

To be honest, I’d never heard of this brewer until one recent afternoon, I spent far too much time & money in Raj’s excellent emporium (which is ALL too easily done!). Each time I go in there is more and more beer on his shelves. I hear that he may be opening a beer shop/bar later this year. Should be interesting!

This is an opaque black beer with a head creamy in both colour and texture. The aroma is of roasted barley and a gentle milky coffee. Medium bodied, initial flavours are of roasted malt with a hint of bitter chocolate followed by a pronounced bitter character. The finish is dry with quite a grassy hop aftertaste. A nice stout indeed with none of the sweetening additives like chocolate and quite Irish in character in my opinion.

Superstar DJ and occasional brewer (!) Rik Garner (He really IS a brewer, honest, just that he spins some great vinyl!) brews some quite phenomenally good beers in his well-appointed Salford Railway arch! I’ve had (and recommended to others – frequently) AVA on cask, but I’d struggled to find it in bottle. Until Dan & Gina stepped in with their expanding range of local beers!

If this was any paler, it’d be water! Straw yellow with a fluffy white head and a tart citrussy aroma with lemon zest and a little grapefruit. Ooh but this is a tart little number! Quite medium bodied for such a low abv beer, this is chock full of tart grapefruit and bitter lemon. Initially, quite a shock, but this is one seriously quenching refreshing beer, a nice bitter lemony hoppy finish rounds it off nicely. A beer of such low strength has no right to be so full of flavour! A belter. It is a rare beer that I always have when I see it on draught. This is one such.

Another brewery I see all too little of in bottles. I did have some draught, but that was in Ramsbottom itself and I don’t see Matt’s beers often enough, but then I saw them in Great Ale Year Round and all was right in the world!

A deep golden beer with a lingering white head and a juicy fruit aroma with mango (surprise) and peach upfront. Smooth and full-bodied. The fruit is upfront on the tongue with that juicy mango dancing a Macarena! Really smooth and almost creamy (mangoes & cream anyone?) A lovely fruity beer with a dry finish and substantial resinous and fruity aftertaste. A cracking beer from this small Rammy brewery. Nice to see his beer available closer to home!

Never been to The Hope in Stockport, nor ever had a Fool Hardy Brewery beer in any form. So I was glad to see some at Dan & Gina’s excellent little Micro Bar in Bolton Market. The beer itself………….

Black with a beige/tan head and a lovely welcoming aroma of chocolate/cocoa. Oh yes, my boxes are ticked! Medium to full-bodied and with a lovely smooth feel. The chocolate I would describe as just short of a “Bournville” flavour, bittersweet. A lovely mouthful with a nice hoppy bitter edge to it and quite a nice hoppy/coffee edge to the aftertaste. Excellent! 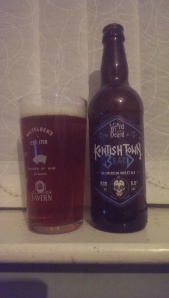 I had this on cask at the Manchester Beer & Cider Festival & was hugely impressed….until a certain young Mr Sweeney from Bank Top guzzled mine (“by accident”, but I don’t hold grudges….much!) It was called Camden Beard then……We shan’t go into the murky waters of corporate bullying again, shall we? But I DO love that asterisk! (Apply your own vowel)

A deep gold almost amber beer this with a clinging white head and a big whack of citrus hop on the nose (presumably the Cascade & Centennial). Really smooth in the mouth with almost a creaminess to the texture making it feel really full-bodied.

Refreshing, as you would expect of a Wheat Beer, there’s all kinds of fruitiness in the mouth, with satsuma, grapefruit, a bit of apricot….this mellows to the satsuma/tangerine following the swallow. There is an understated bitterness to the finish followed by a nice, none too assertive resinous aftertaste with a lip smacking tangerine taste. And I drank this all myself! 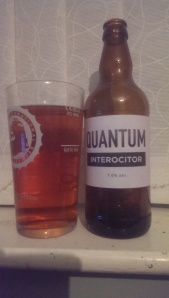 Always like to have one of Jay’s beers in the stash. Call it a Comfort Blanket!

A deep golden almost bronze coloured beer, minimal white head quickly diminished leading to a herbal grassy aroma. Full-bodied in the mouth with a certain hedgerow fruitiness with a little gooseberry maybe? Smooth and easy drinking, dangerously so for a beer of this strength!

Lots of fruity British hoppage in here on a big malty backbone. A gentle fruity bitterness in the finish. A lingering grassy fruity aftertaste. One of those beers where UK hops just work real fine. Big bodied (like myself), full flavoured and tasty! (Unlike….)

Right then. That’s it for another week. It’s getting late and I need my ugly sleep to be ready for a MTB with Privateer Beers at Great Ale Year Round tomorrow (Saturday) morning. See you there?