“He’s cold to the kiss. In ignorance he’s dangerous, in innocence he’s bliss.

And he stalks the night with sonar senses and he holds you tight.

Masturbates the madness in you”

(The video link was a judgement call. The passion of live performance over the sound quality of the album track. Repeated games of “Rock, Paper, Scissors” to decide and Live Performance wins every time!)

I know that I’ve mentioned my love of the 3 albums of the first incarnation of The Chameleons, for me, one of the seminal post-punk bands. They reached their creative peak (in my opinion) with their final album, “Strange Times”, ironically, recorded with a major label, Geffen. Songs like “Swamp Thing”, “Tears”, “Soul In Isolation” and the above track “Mad Jack”, when listened to nearly 30 years later have – for me – more than stood the test of time.

Embarrassingly, I must have played my cassette of Strange Times to death and STILL never got the lyrics of “Mad Jack” right! I mean, to young ears, “Masturbates” does sound like “Must have been”, right? What this blog piece has made me do is log on to iTunes and fling some cash the way of Cupertino to download the album. An 80s rock classic. Treat yourself to some passionate lyrics and tight playing!

Now, in a slight diversion from the norm, no bottles today!

1) There’s been 4 bottle posts this month and I don’t want to a) bore you TOO much, and b) A snap decision whilst tilting glass to lips the other evening. A surprising evening!

The aim of this particular Thursday evening mission was to swap some bottles with the legend that is Jamie from Port Street Beer House, who, for those who don’t know, also brews some excellent beers (see previous reviews) under the guise of the “Five Oh Brew Co“. From the moment he ventured to have a chat with a certain ageing nerd holding a Nexus 7, I’ve always got on with Jamie. The bonus is in the fact that he is a top bar keep who knows his stuff (as do all at Port Street) and is damned passionate about beer. So much so, that he stuck his metaphorical head above the brewing parapet and brewed himself. Damned well too.

So, bottle swaps done, the Arch-Nemesis (who else?) and I settle down to a pint of Pale by the Indy Man Brew House (brewed with the mighty Black Jack).  Living up to name, this was a very pale golden beer at 4%abv with simply LOADS of citrus going on! Tart and refreshing, I was damned pleased I went this route rather than the dark side. This beer would grace any bar and would be an excellent “house beer” should Port Street ever consider one. A gentle fruity bitterness in this light-bodied beer was followed by some drying fruity resinous stuff that just completed the pint nicely. Excellent. I followed this with a pint of Kipling by Thornbridge.

To be upfront, I adore the dark stuff that comes from Bakewell, but the pales? Never quite got the hype myself – not from Thornbridge, but Social Media – nice? Yes, good well made beer. But the purple prose that I have seen seems unjustified in the beers that I have had. Same here with Kipling. A lovely looking pale golden pint with a drool provoking lemony aroma. In the mouth? Just…nice. The fruitiness in the talk didn’t strut enough for me. Maybe I need to recalibrate my expectations. Over a pint of St Petersburg. Now THERE’S a beer!

With a cheery handshake with Mr Hancock and a bagful of bottles (the Nemesis had a few for me too!), we strolled off to the second of a planned 3 stops (well, it WAS a “school night”!)

Being a bit of a stickler for all things local (where possible), I was delighted to see Squawk Brewing Porter. Had that and their IPA in bottle and both were superb. With my pub strolling outings becoming decreasingly frequent (not having done a “Hector Rivera” QUITE yet!), I don’t see the new brewers offerings in the wild. Tonight however…

Dark…..Creamy coloured and textured head with a lovely smooth chocolatey aroma. Oooh! More chocolate in this smooth full-bodied beer, some coffee hints too with a nice hoppy finish in with a gentle bitterness. I would have had another, but….my eye was wandering…..decisions decisions…..the angel on my shoulder was saying “stay local”

Black Jack – Red Rye Saison was the shout. 7% abv!!! On a school night! Hugely irresponsible, but OH WHAT A BEER! Far too refreshing for a beer of this strength. A little of that yeasty funk, spice and tartness form the rye and as red as David Moyes’ redundancy cheque! Just superb. But a bit stupid! Ah well….tomorrow was another day, eh? 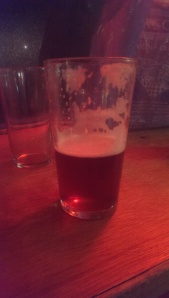 Comment : Soup Kitchen is getting a wee bit like Joshua Brooks. If this selection continues along the excellent lines of tonight, could well become a “go to” bar for the NQ. Great beers and superb tunes from Mr DJ – good food too so I’m told. The full package then! 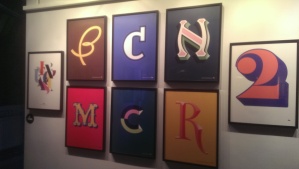 This is a hard beastie to find. I had been once before, guided by the Arch-Nemesis. From memory, the beer was from Outstanding of Bury (just the one on cask) and they had a superb bottle range. It was the sheer physical “coolness” of the space on a mid-summer afternoon that got me. That temperature drop you get when you go subterranean (see Gaslamp). Abiding memory was of a great art space with nice beer and awesome tunes (“I’ll Take Care of You” Gil Scott-Heron & Jamie XX stood out)

Tonight. Upon walking down the steps it was obvious that we had stumbled across something. This place was busier than Port Street, and you don’t say that about many bars midweek!

2 hand pumps on the bar too (along with 4 keg fonts from Outstanding) Nemesis went for the Outstanding whilst I went for TEA by First Chop. First time on draught for me. Amber to brown with a lovely somewhat earthy leafy aroma. Of course! TEA! Duh! Full bodied with good fruitiness and an earthy dry finish. I was possibly hoodwinked by the name into imagining tannins in the brew as there was quite a dryness on the tongue, almost reminiscent of Earl Grey. Worked well for me!

What we had stumbled into was the launch party for “BCN MCR” A design exhibition featuring the best art designers from both Manchester & Barcelona. This cool & trendy crowd had just been invaded by a two-man Dad’s Army! We must have upped the average age by 2 years!

Got to say, being no art connoisseur myself, I really enjoyed wandering around checking out the posters and installations. 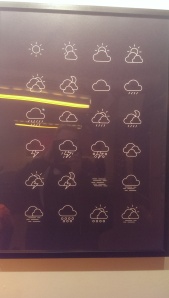 Well. A surprising evening both on the beer front and culturally too.  3 excellent bars and superb beers – and one sluggish old man in the morning!

Anybody fancy a game of ping-pong?