You can be active with the activists, Or sleeping with the sleepers
While you’re waiting for the great leap forwards

One leap forward, two leaps back, will politics get me the sack?

Waiting for the great leap forwards.

Here comes the future and you can’t run from it
If you’ve got a blacklist I want to be on it.

Waiting for the great leap forwards”

Billy Bragg is like musical Marmite to many. If it’s not his politics, it’s his Essex tones. Some people will always find something to disagree with, but mostly, it’s his politics.

Now, I’ve used “Great Leap Forwards”, which is unabashedly political. Because a sense of community is – in itself – political. Because others – politicians – have made it that way. This is the track that he plays as his final encore at his shows, the final scouring before you walk out of the venue feeling scrubbed clean and purified.

But he is not JUST a political lyricist and performer. He is, quite simply, a Great British songwriter and writes the most astonishing love songs – have a listen to “Must I Paint You A Picture” and see what I mean.

I just wish I had a tenth of his commitment and just 1% of his talent. But I don’t. So I’ll twaddle on (like I do) about beer. 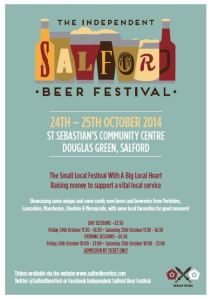 Well. Here we are!

This is now feeling oh so REAL! Actual times and dates and prices and everything! It doesn’t feel like a Great Leap Forward, it seems like we’ve achieved nothing yet, but it FEELS like so much progress has been made, that it warranted an update.

Firstly : courtesy of Darren Turpin (yes, he of Greater Manchester Ale News fame!) for the website & Andy Heggs of the mighty HopOnTheBike blog for the logo / flyer design…..THE WEBSITE!!! IT’S ALIVE!!! And it’s HERE at http://www.salfordbeerfest.com

Hopefully, all the information that you might need is there! Including the purchase of tickets via Eventbrite priced at £3.50 for the afternoon sessions and £4.50 for the evenings.

Having never quite done this kind of thing before, I never realised quite how much preparatory work goes into it. Contacting Council & the authorities, Police, licensing, Glassware, Equipment Hire, Printing, Ticketing…….And that’s before we get to the beer! Keeping the procurement of THAT under control has been a major headache. there’s SO much good stuff out there, I want it all! Yet I know that to overstretch could be disastrous!

So, unless ticket sales go utterly Bonkers, I’m aiming for 35 casks + Ciders. The list isn’t full quite yet, there’s nothing from Liverpool (er…update…..) yet and 1 or 2 from Manchester & Yorkshire that I’m waiting on, so the list has a little evolving to undergo yet AND (depending upon tickets sales) it could get slightly bigger! But that’s up to you, the potential punters! 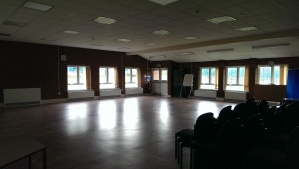 (Where the beer will live!)

One of the big decisions was “music, or no music”. This was a tricky one, but, being a music lover myself, we’ve opted for the former, but just for the evening sessions. We have a few offers and will be sizing them up, they’re certainly not your normal offerings, I can say THAT much!

Food will be sold and will be of the tasty and wholesome variety both meat and vegetarian, rather than street food style. Just seems to fit with the local services ethos, being created/served by the people involved in the centre.

I might even see if we can get some pub gameage on! But what you lot probably want to know about is which breweries are on board?

So, with an addition or 4 still to be made…..here you go…

The beer list itself will come WAY later. Initially on the website, then (hopefully) in a fest booklet (yet to be priced up!)

Will this all run swimmingly? Probably not. Will we be able to please everyone? Same answer! There’s ALWAYS something not right, be it number of toilets, seats, tables, the poker tables being rigged….(er…scratch that last!). But you know what? We’re gonna give this a bloody good go and if it ain’t perfect, it won’t be for the want of trying!

Come on! Join us for a beer! You’ll enjoy it….I hope! (And be prepared for me bludgeoning you about the eyes on social media about it until every ticket is SOLD!)

Well, that’s about it for now. Go buy some tickets!!!