Manchester is a city blessed with some truly beautiful pubs. How to choose your favourite? You could quite easily torture yourself with this question. With stunning buildings like The Britons Protection, The Peveril of the Peak, The Lass O’Gowrie, The Hare and Hounds, The Marble Arch? All just lovely places to drink beer.

To get me in the gut, a pub has to have “soul” an almost indefinable quality. Let’s call it “feel”. It should have history. Therefore, it should be reasonably old.

It should also have good beer – obviously.

But, when all is said and done and you list all of Manchester’s really lovely hostelries, it comes down to a question. “Where do I drink the most”?

There has been a pub on the “New Cross” junction of Great Ancoats Street and Oldham Street. since at least 1734, when this part of what we now know as Manchester was within the distinctly separate area of “Ancoates”. I quote…

“An interesting drawing hidden away from the public view in a volume stored in one of our public buildings” (now held at Manchester Libraries!) shows “….an alehouse with the curious designation of The Iron Dish and Cob of Coal”[1]

The image is faint, but the description in the book (a fine read) clearly relates to the view from Oldham Street to Newton Lane (now known as Oldham Road). It is also reasonably certain that this premises would occupy a fraction of the site of the current pub! At that time, “Ancoates” would have been little but a hamlet and not yet swallowed by its near neighbour.

It seems that the current building was built around 1800 and various historical sources have lists of the various licencees of “The Crown Vaults” or “The Crown Inn” in the mid-1800s. Ancoat(e)s at that time was notorious slum area heavily populated with immigrant Irish labourers and their families as was nearby Angel Meadow.

The pub eventually became the property of Wilsons Brewery of Newton Heath and was known as very popular with Manchester City fans. An incident in 1989 inside the pub lead to a United fan getting (allegedly) stabbed and lead to the closure of the pub.

For 16 years. A large part of the reason for this prolonged closure being a fire attack on the pub causing extensive damage to the interior.

The pub came into the hands of the current owners in 2005 when – with the assistance of English Heritage (the building was Grade II Listed in October 1974) – it reopened for business.

I only really started going myself about two years ago or so. But in that small time, it has worked it charm and wormed its way into my heart.

Victorian Gothic in style, the pub originally had a central bar for a large open space, but this was restructured internally to create 2 smaller rooms to the rear of the bar. The ceiling in the main room bears the scars of the 90s fire damage, ceilings on both sides having netting in place to protect against any of the ornate plaster work falling onto unwary customers. You can’t help but crane your neck to admire though. Truly beautiful.

The ceiling in the small rear room is intact (although still with protective netting) and another cricked neck is worth risking to admire its beauty. 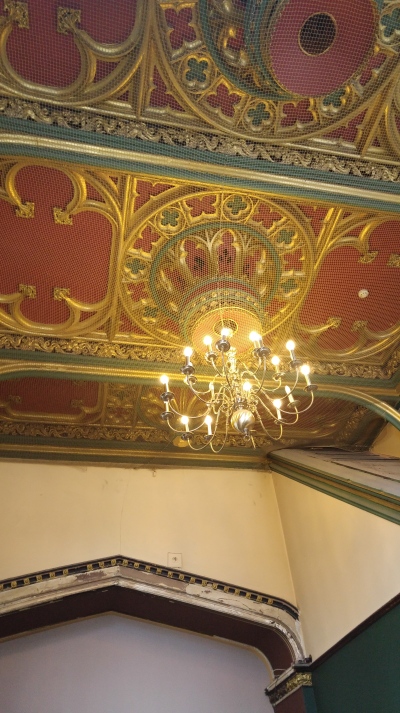 With the TV now effectively out of commission, this is a great place to indulge in some truly excellent beer and chat with friends – the normally unobtrusive background music is usually right up my street too!

The beers are sourced (mostly) from local Micros both on cask and craft keg – with many of my favourite local Micros like Tickety Brew, Track, Runaway etc – and there is an extensive selection of real ciders to choose from if fermented apple juice be your thing.

This pub just …… sums up Manchester to me.

It has a Mancunian Soul.

And I love it.

(This piece was originally commissioned by  (and published on) Manchester Beer Week – an event created and driven by Connor Murphy.)

Come to Manchester between 10th – 19th June and get involved. It’s going to be special.