I’ve been guilty of using the phrase-cum-hashtag “BeerPeopleAreGoodPeople” for a wee while. But one particular brewer stands out. A refugee from that there London. Malcolm Bastow. The hop loving brewer brewing in Outwood, Wakefield as Five Towns Brewery.

I first came across the beers brewed by Malcolm on my first visit to Yorkshire Ales of Snaith. I was looking for something different. It was around the time that I was starting to focus on Northern beers to the exclusion of other stuff, having noticed that nobody else was. I was searching for a USP for this blog. A USP that eventually led to The Independent Salford Beer Festival.

And those beers that I bought from Adrian & Vicky Pettit were rather special. Beers like Peculiar Blue, RooBarb and Niamh’s Nemesis testified to someone with a love of US and Southern Hemisphere hops. Someone who wasn’t shy in using them. Punchy pales, full of hoppy goodness.

I was instantly smitten.

Then the deal was sealed. I realised what a decent bloke he was, when I tweeted, back in (roughly) February 2014,that i thought that I’d agreed to organise a beer festival. And I was shitting myself. I needed help. Malcolm’s response? 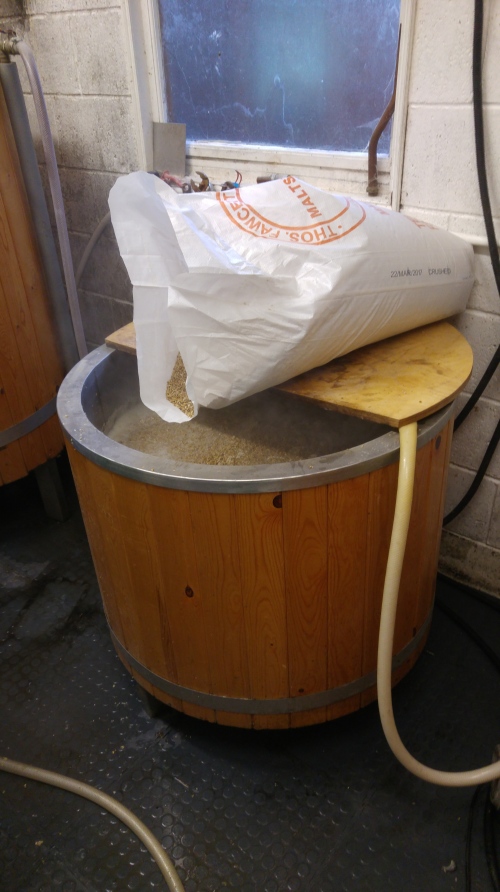 And in the first two years, his beers won “Beer of the Festival”. From votes from the drinkers. Very discerning drinkers too. And even when – last year – he DIDN’T win, his “Beauty & and The Beast” fruited DIPA entered into local legend. He brews beers that he himself would like to drink. Beers without compromise. And his beers are a secret that Yorkshire would like to keep.

BOLLOCKS  TO  THAT. Following some tactical mithering, you can occasionally find his beers on this side of the hills, via Allgates and Black Jack. Frequently betraying his love of the music of David Bowie with names like “V2 Schneider”, “What In The World”, “Secret Life of Arabica” and the aforementioned “Beauty & The Beast”. It isn’t often that I’ll drink a pint of an 8% Pale Ale. But I do with his. I’m an unashamed fan boy.

And – ever so gradually – his beers have been getting more fans over here. Which is how I found myself jumping in my car at 5:45 am on Saturday to drive over to Wakefield, to brew a collaboration for my favourite CAMRA beer festival, organised by my local branch, Bolton.

I won’t bore you with the minutiae of a brew day. But some things need mentioning.

Malcolm brews on a 2.5bbl kit. In plain language, that means that he will normally get the equivalent of 9 casks from each brew (with bigger beers like “Beauty”, that could drop to 6 or 7). So each brew has limited availability.

And Saturday’s brew will be even more limited. Possibly as little as 4 casks will see the light of day (with some of THAT going into bottle).

Following the “election” of The Donald, I contacted Malcolm about brewing a beer to “celebrate”. The name came first. Impeachment. With an obvious ingredient inference. Peaches. 200g of pureed peach going into each cask. And lots of hops.

I was fortunate to be given the task of opening and breaking up a pack of Equanot leaf hops. At 14.5% Alpha, they were incredibly pungent and aromatic. I opened the bag and inhaled. Yes, I admit it, I inhaled. I’m an addict. And they smelled astonishing.

This beer will be single hopped with Equanot for bitterness, aroma and flavour. Not to forget that peach. It will be fruity. It will be hoppy. It will be bitter. It’s going to be bloody lovely.

And – over here – you’ll only get it at Bolton Beer Festival at The Ukrainian Club. From 27th April.

Come along and enjoy. It really is a belting little festival.