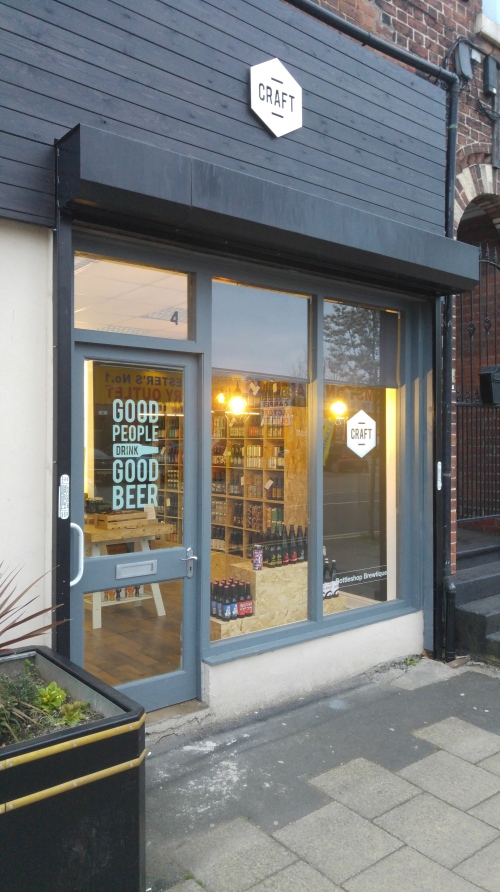 In what felt like an antidote to the “End Of Days” mentality that has permeated the UK Craft Beer scene recently, following the recent Tesco craft takeover….. (Who needs Stone IPA or Dales Pale Ale anyway…)  this felt like getting back to basics. Very attractive basics. And it will started with an intercepted tweet.

And a drive to Urmston.

I haven’t drunk much at home in the last 6 months or so, kind of lost the thread a little. Lost touch a bit. I needed something to refresh my sensibilities. And – without giving away any of my secrets for #ISBF4 – to do some research.

So I find myself outside a new little beer shop. Craft Brewtique.

Speaking with Andy Heggs, something he said struck me as glaringly obvious. Just the look of the shop have away the owner Jay’s previous career. In design. The place looks lovely. Small, yet spacious. There’s room to browse. With the shelves either side carefully stacked with the luminaries of UK beer today.

You want Marble? Cloudwater? Buxton? Beavertown? Siren? Verdant? Etc….. All check.
I saw what I would like. Some careful thought in stocking, with new locals like Five Cloud and Rivington alongside stellar Southern newcomers like Deya and Elusive. More excellent local stuff from Runaway & ABC, Chorlton & Mad Hatter. Most bases are covered.

And impressively, Jay is open to suggestions. In fact, his pinned tweet is asking which breweries people would like to see him stock.

Although small, there is room for improvement. There is – in my humble…. – room for a table or four and a small keg wall. A small installation would make a huge difference and add a further counterpoint to the Wetherspoons directly opposite.

But what Jay has put together so far, works for me. It’s a competitive world is the independent beer shop. But I have a feeling that Jay might just have found a prime location in Urmston.

Get on down. Just 3 minutes from Jct 10 of the M60 and 60 seconds from Urmston train station. Cracking selection, carefully compiled and great value too.

I just hope that the guy I persuaded to buy the Mad Hatter Tsatsiki Sour enjoys it!