“If you asked me for heaven, I would give you a mountain top.

If you wanted to hear my love music, I would get all the angels pluck their harps…”

As one door closes, another one opens – or so the common saying goes.

It was only following yesterday’s brewday that the juxtaposition of these two brewdays (Offbeat & Wigan Brewhouse) hit me. And their significance in my personal “Beer Journey”.

Allgates Brewery in Wigan were my first “Beer Crush”. In my first (proper) “Golden Pints” in 2013 they were my Brewery of the Year. I’ve always been a lover of sessionable Pale Ales and that was Allgates default position by force of demographic, Wigan beer drinkers liked session beers it would seem.

For those who are regularly bored enough to read my drivel, I’ve been a massive advocate of “The Road To Wigan Beer” funbus day out. Again, Allgates Brewery – a tour by bus around their (former – more later) estate of pubs. It’s a great day out. And sold out – for the second year running.

Allgates had been a big supporter of The Independent Salford Beer Festival from first tweet announcement to date. They always delivered what I needed, full-flavoured beer imbued with that elusive quality. Sheer drinkability.

It saddened me when they hit some difficulties a while back. Even more so when news filtered through to me that the brewery had been sold – and was to be renamed. The old (and rather beautiful) “tower brewery” had been in mothballs for too long. It was too beautiful and logical a setup to remain unused.

And gradually, people started to forget about Allgates.

I couldn’t. They were a HUGE part of my journey. My first brewday was with Allgates (and Tandleman / Tyson – beer writers I looked up to. Jay Krause was due to be involved too – but was poorly). You don’t forget stuff like this.

Nor does Malcolm (Five Towns) Bastow – Organiser of my favourite beer festival. The East West Fest in Wakefield’s famous Red Shed. Having heard that Wigan Brewhouse (the new owners) wanted to continue in an Allgates style vein with the beers, he fancied a collab for East West.

So did I. I was curious to see the old brewery back in action….. 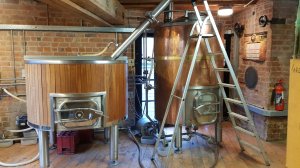 It felt good to be back!

Jonathan Provost – the Allgates brewer – stayed with the new business, which was a comfort. He knows his stuff and is bloody good at it.

Malcolm and JP (with me as digger/observer) had collaborated previously on an IPA that was a bit stronger than Allgates usual. At 5.6% “Station to Station” was a pretty pretty thing.

For East West, we wanted something in a similar vein. 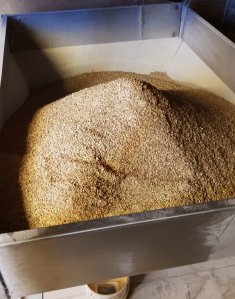 Again, I won’t bore you with the details of a brewday – long periods of inactivity and chat punctuated by flurries of intense physical activity – but this day in particular was a hugely pleasant walk down memory lane. 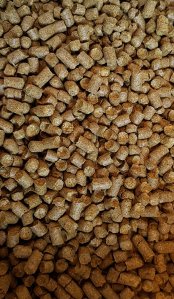 As is an occasional joy on a brewday, I got to sample some beers from the tank. And oh were they good! 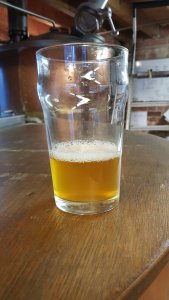 The Kicker Session IPA was delicious – it was the first Wigan Brewhouse beer I’d had – at Wigan Beer Festival – and this version (from tank) was even better, fresh and sharp.

Gin Pit (a former Allgates recipe) had been retained and brewed. That tasted bloody superb. With the botanicals (that name…) merely adding to the refreshment.

Porteresque (the base beer for the Boston Plum Porter) may never see the outside of the brewery again, but from the tank was as good a straight Porter as I’ve had.

I got a smell of the tea used in Blue Sky Tea. WOW. I’m rarely astonished. But I’ve never smelt a tea so citrussy…. I might see if Atkinsons have some in Mackie Mayor! 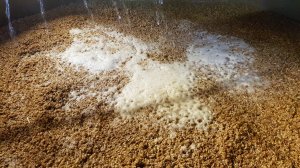 I dug that out later. And was reminded by my aching muscles that I’m a Desk Jockey.

It’s good to see this beautiful brewery up and running again. I’ve got a big soft spot for this place. You never forget your first love.

Whilst I’m sad to have lost Allgates as a brewery, Wigan Brewhouse appear to be continuing in a similar vein, keeping the best of Allgates whilst stamping their own mark with new beers and that fabulous branding – with more than a nod to the beautiful history of Northern Soul (where my musical heart lies) & the mighty Wigan Casino.

Going back to the beer we’ve made, Malcolm & I are both Bowie fans. And (with the history of “Station to Station” in mind) fancied another Bowie reference.

My thinking was…… “US Hopped…… Something from “Young Americans”……

Say “Hello” to “Fascination US IPA” Coming soon. And certainly coming to The Red Shed on 10th May.

A sad “goodbye” to Allgates Brewery.

A big “HELLO” to Wigan Brewhouse.