With a growing reputation and – it’s fair to say – the most beautiful of brewtaps, Rivington have made an impact in the last 18 months. From hesitant beginnings brewing to an assumed “market”, they’ve made big strides brewing not just hazy hop bombs, but delicate Grisettes and a variety of styles in between.

In short, they make excellent beer.

Which, when making my Brewery choices for East West Fest is rather important.

Located on a working farm – as you will see later – on the side of Upper Anglezarke Reservoir, it’s a bit on the picturesque side and simply has to be one of the prettiest places I’ve been for a brewday.

Being one of the few breweries from outside of the Central Manchester area to gain penetration in the city, I’ve tasted Ben & Mick’s beers on a regular basis and have been able to map their development and increasing confidence through a range of flavours, both bold and delicate and whilst they’ve gained a loyal following for beers like “Never Known A Fog Like It” (rightly so), I’ve been even more enamoured with the lightness of touch of “Proper Ace”, their Sorachi Grisette – a seriously pretty thing.

Something I hit HARD at their last “Tap Beneath The Trees” 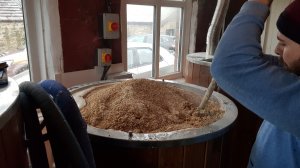 Given that this was the final brewday for me for East West, Malcolm decided he wouldn’t miss it, which is how the three of us (with Mick working elsewhere on the farm), found ourselves in the former dairy – the current brewery (plans to move to larger premises on Home Farm opposite being in development…)

The plan was for a big, fruity, hoppy beast. That much was evident from the 155kg of malt (Pale, Wheat & Oats) that went into that 400L mash run, like a grain mountain.

There’s something elemental and soul enhancing about the smells of steeping malt, in the same way that the smell of fresh baked bread lifts the spirits. It’s something I could never tire of.

The mashing in was a delicate process, given how full the vessel was, this was almost “maxed out”, again an indicator of what is to come….

Whilst the mash was steeping, Malcolm and I popped out for a different brew. In the lovely Cafe at Spring Cottage (a welcome beer sponsor from #ISBF4!

A really lovely place, just over the reservoir off Rivington Lane

Again, I won’t bore you with the minutiae of a brewday (Grains, hot water, boiling, hops, yeast etc), the real interest for me was listening to Ben & Malcolm discussing and comparing the similarities and differences of their methodologies – given that they have obvious parallels in both being similar sizes (2.5bbl) and flavour forward.

What you are seeing in these images, will be a Single Hopped Citra DIPA of somewhere over 8% abv, with ALL the hops added late and in dry hop.

It’ll be big, juicy and very fruity. And it’s got me salivating for The Red Shed already. (Less than 4 weeks to go now)

And that is where this beer will launch. In a little Red Shed in Wakefield 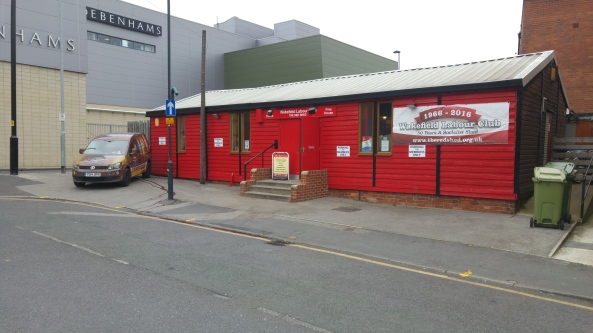 The thing that struck me about this brewday, more than any other, (even more than the simply IMMENSE aromas from the steeping Citra) was the disposal of the spent grain.

I normally dig out the mash tun. I see it as my “reward”. But Ben & Mick (briefly appearing with a mini digger) had other ideas. I felt “cheated” 🙂

The ladies awaited their treat. Mooing in trembling anticipation….

My smile went from ear to ear. I couldn’t stop grinning.

So there you have it. Malt. Citra. Greedy Cows.

Thank you Ben, Malcolm, Mick, Ladies. It was one hell of a day. (With an intriguing return leg – with added fish and chips for #ISBF5…..)

Oh. Naturally, you need to come to The Red Shed on 10th May. You’d be mad not to!