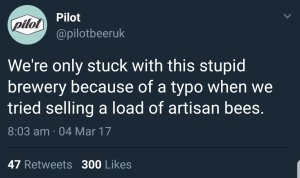 (Pilot – one of THE wittiest Twitter accounts. But they back it up with great beer)

We keep hearing about pubs failing. The statistic of over 20 per week gets trotted out almost er…. weekly. Among those will be some pubs that have a great product, but just don’t “sell” it.

I’ve lost count of the number of times that I’ve walked into a pub – in particular, free houses – and enjoyed a great venue, with excellent beer (but hardly rammed) and asked “You got a Twitter account?” To be told either “No” or “I think so. But we rarely use it…..”

An active social media profile can make a difference. 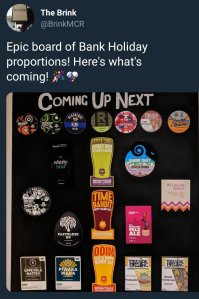 Just something as simple as telling people what you’ve got? Is that difficult? You don’t always have to do it with wit (like Kate), just say what you’ve got!

Rocket science? No. But it can make a difference.

An example as to how this can work……

About 5 months ago, The Smithfield put a cask on of Five Towns‘ “Always Crashing In The Same Car” the winner of “Beer of the Festival” at #ISBF4. An 8.4% Rhubarb infused Belgian Tripel.

I knew it was going on the bar on the Saturday lunchtime, so I tweeted it out, The Smithfield tweeted.

At about 6pm, I turned up at the Smithfield to see faces I hadn’t seen for some time and asked

“Hello! What you doing here?”

I went to the bar and got chatting to someone I didn’t know….

“What you got there?”

Reply? “That. (Pointing to “Always Crashing” clip) Someone tweeted about it earlier….. “

This shit works. But not all do it.

Sometimes it’s not enough to have a great product. Sometimes – with a new venue / bar – it isn’t enough to rely on “word of mouth”, some places don’t have the time to let that build.

You’ve got to sell it. Attract customers. 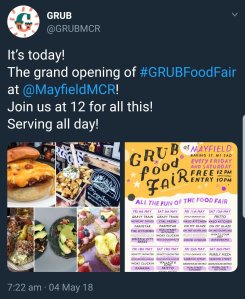 All it takes is a few seconds. A photo. Press “send” ask people to “tell your friends” or “RT” it.

You lose a few seconds of your life.

And – just a thought – if you (as a customer), like where you are, what you are enjoying, tell them to publicise it. You tweet/post it too. Give them a hand up. Show them.

I’m not naive enough to believe it’s the answer to pub closures. But – as Tesco say -…