Amongst all of my assorted nerdery, I adore history.

I’ve been reading a series of historical novels by the author Candace Robb set – predominately in the beautiful city of York, the Owen Archer Mysteries. The street names, the narrow thoroughfares, the grand architecture (the novels are set at a time that The Minster is being constructed) are so evocative.

The last time I went drinking in York was an AWFUL long time ago – 20 years ago at least – and I viewed the development of a vibrant beer scene with a little envy. Wondering when I’d get the opportunity to get across….

Then I saw a tweet a few months back. That – in June – Bad Seed Brewery would be 5 years old.

Bad Seed are based in Malton and have been part of my “Beer Journey” almost from day one. I was drawn to the 330ml bottles with the hanging tags (at a time when most bottles were 500ml). They make excellent tasty beer. And have been fixtures at The Independent Salford Beer Festival from Year 1.

In short, that tweet from Chris Waplington was precisely the excuse I needed to put the proposal to the PPE collective.

I was amazed – when I checked – that Trans Pennine had day return tickets from Manchester at £17! Swiftly bought. (Standard return fare is approx £30)

To make the most of the day, arrival time was set for midday. We had 8 hours to dip our toes in the beery waters. Advice was sought (it HAD been two decades…..), was taken on board and a “crawl” route was constructed.

And I became genuinely excited.

We skipped the Tap on the station – being keen to head into the City – and had our first stop outside the historic boundary of the City Wall at the only pub I remember going into all those years ago.

Just outside the wall – almost on the banks of the Ouse – sits this rather lovely pub. A place I would always start at. Logical (there are two or three ways you could go from this point) and with excellent beer.

Myself and Jock met Steve & Kev at this point. I grabbed a pint of Roosters Birdman, which was absolutely what the “doctor ordered”. Deliciously light and refreshing, fruity and slightly piney, it was superb. And precisely what was required on this warm afternoon after the walk from the station.

The Maltings has an aged feel – lots of wood – in what is a single roomed venue. The beer range had something for all and was commensurately busy. The food smelled excellent, but it was too early for me.

The thing that stood out was the friendliness of the staff. The service was quick and I ended up chatting briefly with one of the bar staff who happened to Cameron’s (Turning Point) sister!

I could happily have stayed a while. But plans being what they are…… and one of our group was ESPECIALLY looking forward to the next venue on my schedule….

The House of the Trembling Madness (Stonegate)

Then you wander upstairs

To the bar….. Helpfully signposted……

It’s been a while since I was so moved by a single roomed venue. Hell, by any venue. It is simply glorious.

And closing in October. (On the walk from The Maltings, you actually walk past the new venue, on Lendal)

The bar – as stated – is single roomed and appears to be in the eaves of this visibly historic building (the rear wall of which is – apparently – 12th century Norman in construction) and is simply beautiful.

Allegedly, it gets PACKED in the evenings, so you are warned.

You get the feeling – whilst drinking a predictably stunning Kernel Pale Ale – that you are breathing history. Something that, in 3 months, you will no longer be able to do. Not in Stonegate anyway.

The bar itself is small. But perfectly formed and well supplied, with cask from Brew York, Marble & Thornbridge and keg from the likes of Wylam, Northern Monk, The Kernel and Magic Rock. You get the idea….

Now. The point of the day was to get to The Rook and Gaskill on Lawrence Street (outside the City Wall to the South East), so the next stop was planned accordingly….

So, heading left along Stonegate, turn right onto Low Petersgate and continue along Colliersgate turning right onto Pavement, until you see opposite…..

The visual antithesis of “Trembling Madness”? Certainly much more modern in feel – in Mancunian terms, a bit more NQ – yet it was here I got my favourite beer of an excellent day (I didn’t have anything less than good).

A larger venue than the previous two, open plan, with (quite literally) a central bar and lots of exposed brickwork. And – unviewed – a basement bar. An accent on food, but still with excellent beer. Plenty of seating meant that – as busy as it was – we could sit and enjoy the beer.

It did exactly what it said in the tin. And was utterly delicious.

In not sure I’ve done this place justice, but it is more than worth a visit. Relaxed, friendly and excellent beer? What’s not to like!

Turning right from the bar, walk along Piccadilly – crossing the Foss – then turn left onto Merchantsgate. At the end turn right then, on the left, you’ll see the signs for the next stop……

There were a couple of groups of people in front of us. Unlike us, they didn’t need to follow signs. They led us in. A sign of popularity. And justly so. 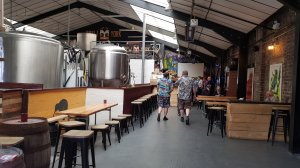 With the surprisingly large brewkit on the left upon entry, the bar is just beyond with a plethora of keg taps augmented by 2 or 3 cask lines. Lots of space as the area just past the bar opens up with plenty of tables for seating.

Sticking (mostly) with low abv beers, seeing their own Jarsa (session IPA) on cask was a pleasant surprise – having only had it on keg before. Delicious, fruity, gently bitter and hugely refreshing. On a warm day, the job was done.

A very pleasant surprise was the outside space facing onto the River Foss, in a warm day, the riverside breeze was most welcome and the tables there were justly popular.

From the first beer I tried, I’ve been hugely impressed with Brew York on cask, in keg and can too (it was a pleasant surprise to see them in my local Asda). They were an obvious invite to #ISBF4 last year. 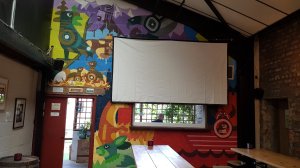 This is an impressive set up, both as a brewery and as a Brewtap. And if it wasn’t for the fact that we had an appointment, we might have stayed……. I had a feeling we’d be back.

Getting back onto Walmgate, turn left and walk along Walmgate for about 400 yards and – across Barbican – you’ll see……

The Rook and Gaskill (Lawrence Street)

Our “furthest out” port of call. The inspiration for this trip. Bad Seed Brewery‘s 5th birthday bash. All the taps at the pub were dedicated to their beers.

I’ve like their beers from the start. They have a place fixed on my personal beer journey. They are unsung. They do the basic job of making tasty beer without fanfare or fuss.

My kind of brewery.

The Rook was a medium sized and open plan pub wrapped around a central bar with 7 or 8 cask lines and more than double that on keg.

The beers were predictably excellent, with Session IPA doing the required job of refreshing on this increasingly warm afternoon, Juice Freak (NEIPA) was a hazy fruity treat and Rule The Roost (Espresso Stout) had all the coffee flavour I wanted and livened me up enough to watch some of the Korea v Mexico match…..

Another welcome bit of outside space here too.

Nice pub this. A proper pub too and well worth the walk. (and let’s be straight here, nowhere is far too walk to in York) There may even have been upstairs space, but we didn’t explore….

Having received a tip from Chris for somewhere to stop on the way back to the Station, we decided to break that walk in two by popping back to the impressive Brew York Tap Room

Leaving the Tap Room, we headed up Walmgate, continued onto Colliergate then Fossgate. Turning left onto Church Street then left onto Patrick Pool, takes you to…… 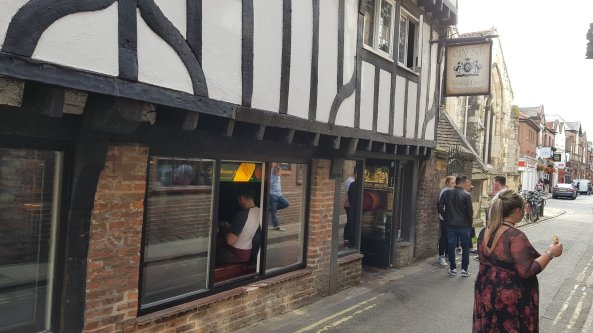 Again, an emphasis on keg, but with interesting cask from Wild Weather and Northern Whisper.

By this time, I was feeling it a little. But Magic Rock Grapefruit High Wire always comes to my rescue….

This is another lovely bar and serves to emphasise what York has to offer, it is one of the longest standing “craft” bars and deserves its reputation.

I’ll be back to do it more justice… See below.

A swift half back in The Trembling Madness led us back towards the train station at the end of our day. A visual treat.

There was so much more to see. To do. Bars /pubs we didn’t get to try, it seemed such a shame to leave.

I think it was in that last visit to The House of the Trembling Madness that the three of us from “up here” (Keg being on a visit from t’Sarf) made our decision to come back. To give York the time it deserves. 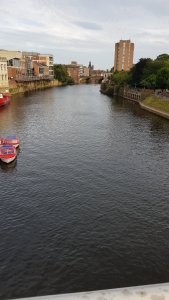 That makes August a busy month. Brewing a special for the #ISBF5 ticket launch the weekend before, the weekend after being (for me & TLO) Camping at Rivington (Tap Beneath the Trees).

But, do you know what? York is one stunning place to go drinking.

If you haven’t already, then try it yourself. You won’t be disappointed. Trust me.