‘Cause you don’t talk to the water boy
And there’s so much you could learn but you don’t want to know,
You will not back up an inch ever, that’s why you will not survive!”

As much as I love beer, I love music. Sometimes, I get all “High Fidelity” and start to make that dreaded nerd fest thing “The All-Time” list. Of course, tastes change over time, but some things stay the same. As John Peel used to say about The (mighty) Fall “Always different, always the same”. This phrase was used on Monday in The Guardian in an article about the new single by Spoon, which led me to this article where Britt Daniel, from the band, gave a brief run down of some of the standout tunes in their 21 year career so far.

Spoon are a band that I return to repeatedly when my musical palate feels a bit jaded. I’m not sure where the phrase “The kings of minimal indie” came from, and it’s probably not entirely accurate about what they do, but it fits, in that there isn’t anything in the tunes that shouldn’t be there. They’re stripped down, rhythmically tight, alternately subtle and powerful, delicate and driven.

It may sound rather stupid, but one of my favourite moments in Manchester in the last 2 years was being stood in Common Bar on Edge St one weekday evening, when the DJ played “Got Nuffin‘ and I found myself shambling drunkenly over to the DJ to say “Thank You”. Just one of (if not the) best bands out there, for me, at the moment. I just hope that they announce a date in Manchester for the new album!

If you have ever read one of these before, you will know what comes next! If you haven’t….this is the format…

1. The Beer, 2. The Brewer, 3. The Strength, 4. The beer style, 5. The Price & Size, 6. The discount (and why, eg: for CAMRA membership or shop deal, where applicable) 7. Where from,  and, If a website for the vendor exists, the hyperlink to the shop / brewer website, just in case you are inspired enough by my ramblings to make a purchase! Here goes….And remember, if you like the look of something, click on the (purple) hyperlink! 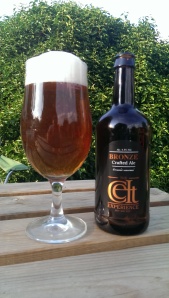 First mouthful is really fruity, with all that hedgerow fruit immediately apparent with a touch of blackcurrant too. Firm cheesecake biscuity malt underlay with a big carpet of fruity bitterness on top of it all.

That bitterness satays (or even “stays”!) awhile before giving space for a big grassy, almost oaky, hop aftertaste. A really big fruity bitter beer. Celt do some much more “experimental” beer, but it’s great to see them getting a beer as traditional as this, just right. Much maligned is bitter, as a style, but this, for me, is a fine example. 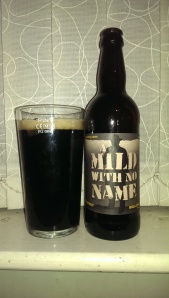 2. Mild With No Name – Billericay Brewing (Essex) – 5.5% abv – Strong Mild (Hmmm!) – £3.50 (500ml) – 10% for 12 or more – Great Ale Year Round (Bolton Market)
Another bottle, another “traditional” British beer style! But all may not be as labelled with this particular beer…..
Very dark beer, almost black with a tan coloured head and an aroma groaning with milk chocolate.

Full-bodied beer, lush and creamy textured. Full on chocolate assails the taste buds with this dark puppy. Chocolate digestives provide the body here then more sweet chocolate fills the mouth, coating the sides before subsiding and yielding primacy to a gentle bitterness and quite a big grassy hop finish.

Not sure that I would call this a mild personally, more Porter territory for me, but a fine beer nonetheless. 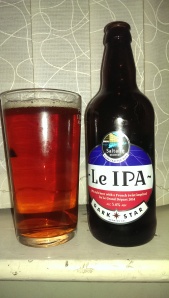 3. Le IPA – Saltaire Brewery (Shipley, W Yorks) / Dark Star (Brighton, W Sussex) – 5.6% abv – IPA – £1.99 – 0 – Booths (Media City, Salford)
Amber coloured beer with a thin white head and a fruity aroma, but quite sweet, pineapple maybe?Caramel biscuit malt in this full-bodied mouthful, again fruity, but sticky like pineapple jam mixed with marmalade. Quite a bitterness follows that swallow, with a good resinous pine dollop to round off the aftertaste. Whilst it tastes every fraction of its strength, this is smooth and very easy to drink. Dangerously so, at the strength!  (Short but sweet!) 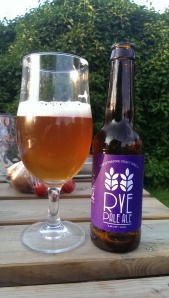 A small supermarket, on a fairly quiet throroughfare. Walk in past the checkout. And there, in the fridges off to the right, is more local beer (and “craft” from around the country) than anyone should have any right to expect! It’s bloody marvellous the range you can fit into such a small space! (And I didn’t even check out the shelves in the rest of the shop!)

An interesting fruitiness to this beer, apricot maybe with more of that tangerine. But that Rye spice leads to an almost arid dryness. Really sudden. Further mouthfuls are the same, quite lush fruitiness ended quite suddenly with tongue curling dryness. Big hoppy finish to round it off. Quite unusual, but this really works for me! 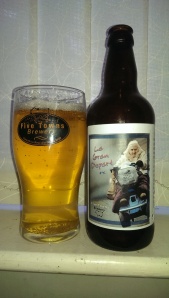 5. Le Gran Depart – Five Towns Brewery (Outwood, W Yorkshire) – 4% abv – Pale Ale – Direct From The Brewer (Bought)
My stated aim. I WILL see more beers by Five Towns in the Manchester area! The only problem with this? Malcolm Bastow’s beers are THAT full of lovely hoppy goodness, that those damned Yorkies keep it all for themselves! If ever there was reason for another War of The Roses…… Anyway, so far, they will be the only brewery with TWO beers at The Independent Salford Beer Festival. Which means….that I am SO good to you lot! It really does!!! At the moment, if you want to buy his stuff, head online to Bierhuis (Ossett) & Yorkshire Ales (Snaith & Malton). They can hook you up! (Great shops both – popping in soon)
Extremely pale golden beer with a light white head and a big citrus aroma (with some bitter orange in there) – a Five Towns hallmark.
Light-bodied and very fruity with grapefruit, gooseberry, a little lemon sharpness too. Each mouthful leaves me wanting more of that uber-dry finish that follows the fruit down the throat. In later mouthfuls, an orangey character became more pronounced. A hugely refreshing beer with a good dollop of bitterness and that pine needle resinous wash at the end of the swallow. Another Outwood cracker from Mr Bastow! 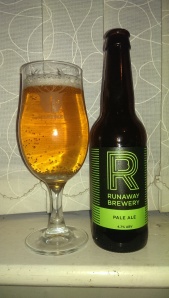 6. Pale Ale – Runaway Brewery (Manchester City Centre) – 4.5% abv – Pale Ale – Direct from the brewer (swap)
I first had this (it was one of my major reasons for going!) at a recent Black Jack open event at their brewery. Mark Welsby’s brewery is the merest of cockstrides from Black Jack. Fortunately really, because when I wanted to pop in and see Mark, I had to ask the Black Jack collective for directions!
Bright and pale gold with a lacey white head and a brash boastful aroma all sharp and tart like a withering Lily Savage one liner put down. Grapefruit and lemon asserting themselves in nasal dominance.

That grapefruit tartness carries on in the mouth, building with each sip. And with each sip comes a growing bitterness. Sliding down really easily, like a beer of this strength should. Really crisp and refreshing and moreish. Nice hoppy bitter too. A fabulous session pale ale!

That’s it for now. Enjoy this summer with some great beer.
Slainte!