“I was following the pack, all swallowed in their coats
With scarves of red tied ’round their throats
To keep their little heads from falling in the snow, and I turned ’round and there you go
And Michael, you would fall and turn the white snow red as strawberries in the summertime”

Simply, the most beautiful tune. Few will better it as a winter themed song – or as just a beautiful song full stop. End of message. 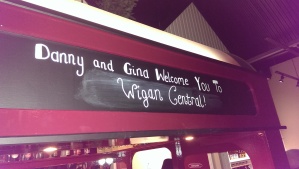 I like Wigan. My love of Allgates’ beers and pubs has almost entered legend. But, therein lies the rub….the only pub I really enjoy in the town centre is The Anvil. However, that all changed on a dark and chilly December evening when I was invited to a “soft opening” of a new bar created by Prospect Brewery and run by Dan & Gina Buck.

I was saddened when Dan & Gina sold on Great Ale Year Round. Felt a bit like losing an arm. Luckily, they sold it on to people (Anne & Steve) who run it in the same vein and keep Bolton supplied with great beer. However, Dan & Gina needed something else…A break & a new challenge. However, I don’t think they had any idea how quickly an opportunity would come around!

Patsy Slevin (Brewer/Owner) and her other half John, the owners of Prospect Brewery of Standish had had their mind set on a bar in Wigan for a while, when the opportunity of a railway arch on Queen Street (1 min walk from Wigan North Western) came up. On Wednesday evening, a select few of us got the chance to see how these plans had born fruit.

And HOW they have……

Let’s get this out of the way (and it WILL re-occur!) …there is a distinct railway theme to this bar!


This being my first sight of the venue, the first thing that struck me was how big it was! Don’t get me wrong, this is not a huge space, but I WAS expecting something a bit more….well….mini! Maybe it’s the height of the arch that gives a greater illusion of space, but this felt quite capacious. Then you look around….everything about the place has been themed around railways. From the seating booths to the right of the entrance, that reminded me of the old First Class compartments on 60s-70s trains (Dad spoiled us!), to the mock old-fashoined railway station style roof that adorns the place above the bar. It’s the little things…..

A lot of thought has gone into the design of this interior. The bar as a “First Class” refreshment booth, the olf fashioned insignia/logo that adorns the polo shirts for the staff which carries on into the bottle display. The hammock-like cargo nets above the booths to take customers’ coats (some of us speculated when the first wag will try to climb up for a kip!)

(Just what a travelling drinker needs! The train home!)

The inclusion of screens integrated into the wall for both Arrivals and (more importantly) Departures was inspired! John’s idea so I was told. I doff my proverbial to him, a superb touch that was remarked upon in approving fashion by all who checked for the next train to Manchester. Who needs Trainline eh?

Of course, all of this thought and design isn’t worth the sweat, if you haven’t got a heart & soul. That’s where Dan & Gina come in. They know what they’re doing. They know how to source and (more importantly) serve great beer and they have they certain something that all good “landlords” have. That little something that makes you feel welcome and that makes you know that you’re in the right place for a decent beer too. 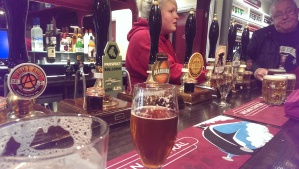 Being a Winter evening, the Dark Side was a-calling like a wolf howling. I heeded the call and tried all 3 darks. Big John & Goodhews from Barngates were both excellent cask Stouts. Roasty and smooth. The Smoked Porter from Runaway was arguably even better on keg than in bottle (and it’s a belter in that format too!), smooth with a little of that Rauchy edge to it.

Pales? Jarl has as much grapefruit sharpness as a Supermarket fruit aisle. Predictable brilliance. The Quiet Riot from Anarchy was a fruity weapon of mass destruction ( I was a little…slow the next day!) at 6.6% abv, all chewy malt and tropical fruit. Deliciously dangerous. The Boheme Pilsner from Marble was a really pleasant surprise that reminded me of Pilsner Urquell and had a lightness of touch. Refreshing. I hope they keep it permanent. 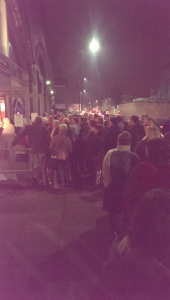 I came back for the formal public opening the next evening (Thursday). That was the queue – albeit swollen with some that were in from 5 for a private Thank You reception. I didn’t think we’d get in!

I chatted with the guys behind Tweed Brewery and thoroughly enjoyed a pint of their Winter Tweed, a tawny coloured beer with chocolate a caramel undertones like a Chomp Bar. But liquid. And with alcohol! A good first beer.

Nice to finally meet Patsy and John. And I told them that they’d done well getting Dan & Gina. But I think they knew that already!

Dan & Gina had stated that they wouldn’t be behind the bar. The crowds dictated otherwise! I chatted with a few people and the feedback was universal. This place has made a big initial impression. It certainly did on me. 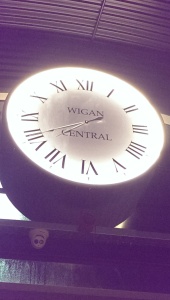 The biggest compliment that I can make? The Anvil has company at Wigan’s top table. It’s called Wigan Central. Make a note and pay it a visit. You won’t be disappointed.