This month has been fairly quiet by my standards! Hence, the accent on diminishing the “cellar” stock. But, they are there to drink, not as decoration of course! So, without further ado, a few more belters that I have picked up on my haphazard wanderings.

The spiel is the same, 1. The Beer, 2. The Brewer, 3. The Strength, 4. The beer style, 5. The Price & Size (including discount, where applicable). 6. Where from,  and, If a website for the vendor exists, the hyperlink to the shop / brewer website. Here goes! 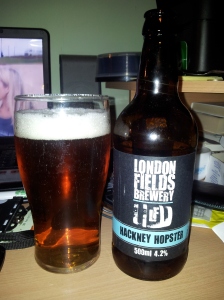 I must confess that I wasn’t blown away by their Unfiltered Lager when I had it. A good UK lager, but not as exceptional as I’d hoped. THIS however worked a treat! A nice lacy white head led to a sweet citrus aroma bringing tangerines and mandarins to the hooter (slightly more mellow than advertised, and better for it). Those aromas were replicated in the mouth with the tangerine more prominent leading to a lovely dry, hoppy finish. A really refreshing fruity beer. (Nice price too!) 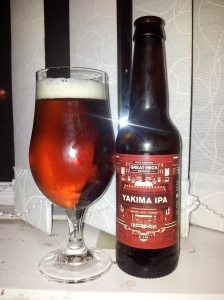 I recently found myself in the Nottingham area facing a dodgy bit of traffic one afternoon. A different route was called for and I suggested nipping for lunch in Ossett (5 mins diversion!) via a sneaky reload at Bierhuis. The butty was lovely, but no more than filling the car with some lovely beer, oh no!

Late last year saw my first (and so far only) encounter with beers from this brewer, in the form of Dark Force Treason Stout, which was my “Beer of the Festival” at the SIBA Northern bash in Manchester. I’d heard that they were going to start bottling soon, so was keen to try this when I saw it.

A deep amber beer with a nice fine white head and an aroma (for me) with toffee and raisins. The flavours were a slightly sweet raisin with a caramelised biscuit. This was a full-bodied beer (which you would expect at the strength) which had some nice resinous hop flourish. Other Yakima hopped beers I’d had, had been a bit ruinous with the piney stuff, but this had a nice warming balance to it. 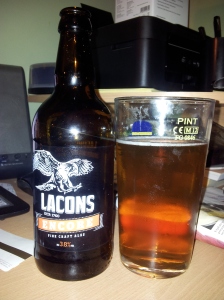 One of the quite surprising things about doing this here “Beer Blogging” has been when a brewery asks if you’d like to try some of their beers. Lacons being one of those who contacted me, a brewer that came to my attention via the excellent Twitter feed / blog of Nathaniel Southwood (aka NateDawg).

A while later, I received a card through the door from Parcelforce. Nipping to the “drop off point” (ie : the local Post Office) I collected said package. Unfortunately, Parcelforce brutalised the packaging, so, 3 bottles sent, 2 received intact. B*stards!

Anyhow (whinge over!) This is an amber coloured beer with a white head which diminished fairly quickly. A light citrus fruity nose leading to a medium body which was clean and refreshing with citrus flavours (a light sugared grapefruit)  and a surprisingly slight smoky note with a nice dry gentle hoppy finish. A pleasing first encounter with this resurrected Norfolk brewer. (Note : Prior to takeover – and eventual closure by Whitbread, Lacons had a sizeable tied house estate, including a good number in London. Note the mirror in this review...https://beersmanchester.wordpress.com/2013/05/29/the-southampton-arms-gospel-oak-london/) 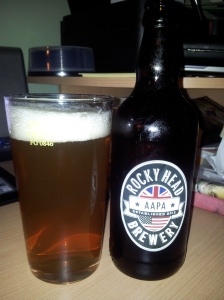 Another beer sourced from the excellent stall run by Damian O’Shea at Castlefield Market.

A lively golden beer with a light haze with a gentle citrus aroma featuring grapefruit, mango and apricot touches. In the mouth this was medium bodied with more citrus hop stuff with a bit of sharp lemon and grapefruit cutting through. Nicely bitter with a nice dry, hoppy finish. One to watch for on draught this and very nice first from this brewery! 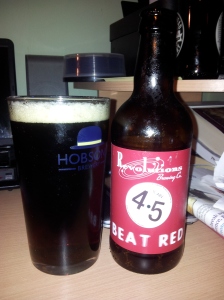 I’ve had a few bottles of Revolutions beers recently and a choice encounter with their Clash London Porter in Soup Kitchen. Some superb beers. I recently had the good fortune to meet Andrew from the brewery in Manchester and had a couple of beers with him. A really top bloke with superb taste in music, as you may expect if you follow the themed names of the beers!

This is a deep ruby coloured beer with a nice spicy hop aroma. Some biscuity malt sweetness more than offset with some spicy hop flavours. I thought I got a hint of chocolate as well!  Nice bitterness with a lasting herbal grassy hop aftertaste. Another really nice beer, nearly made me “Twist & Crawl” (cue cringing attempt at musical punnage!) 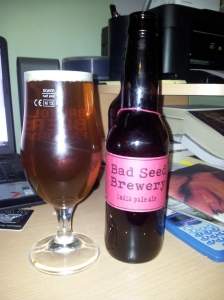 I dearly hope that the name is connected to a Nick Cave reference! This was another fruit of my recent traffic enforced “diversion” to Ossett! A deep gold almost amber beer with a full-on dirty hop aroma courtesy of Columbus, Cascade and Chinook varieties. Fruity marmalade as well on the nose followed by a huge dry hoppiness in the mouth, plenty of citrus fruit here balance by a lovely sweet malt backbone. Don’t be fooled though, the hops are the star attraction here, really bitter and resinous. A fabulous lingering piney resin taste in the aftertaste.

This beer prompts a slight change in my “Beers of the Month”. It is THAT good!

Anyway, better get off before my Sunday Dinner ends up in the dog!

Back in the fresh air next week at The Marble 125 Years celebration next Saturday. See you there!

On that note…’til next time!

An astonishingly hoppy beer from this new Malton brewer. (And wait ’til I tell you about the Espresso Stout – WOOF!)

The first time I heard about Weird Beard was on Twitter earlier this year, I think from Burnley Dave, from The Rake at Borough Market, London (a cracking bar BTW!). A new brewery making their name in the ultra competitive London beer scene. The first time I tasted one of their beers was in Port Street, late in the evening. It was OK, but I was over refreshed and pledged to give them another try.

Last month, I got the opportunity at Font. Black Perle,a coffee milk stout. What a belter! Ticked so many of my taste boxes! A lovely creamy beer with more than a hint of latte.

Shortly after that, I found myself in contact with Damian O’Shea (known on Twitter as @TheAleManMcr). Damian kindly offered to send me a couple of bottles to try. In the year I have been wittering on about beer, nobody has done that before. A strange feeling! However, for various reasons, we never quite “hooked up”. Damian has a stall at Castlefield Market some weeks and it was there that Jaz met him (and bought me a bottle, lovely fella!). Then one Sunday, I got a text to say he’d picked up a couple from Damian for me. Needless to say, I got in the old jalopy and high tailed to Manchester to pick up my loot!

Damian is the “Northern Distributor” for this brewer from Hanwell, West London. They only started brewing commercially earlier this year but have already started to find their way consistently onto some of the city’s better bars, making a name for themselves, with hoppy pales a speciality. I’d been smitten by the Black Perle (one of my top 3 of 2013), but how would I like the pales……. 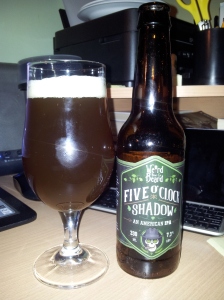 A 7.3% abv American style IPA (7% on draught). This 330ml bottle conditioned beer was deep copper coloured with a fine white head and abundant tropical hop on the nose. Made with 3 malts and 4 hops (Summit, Apollo, Citra and Columbus), this had an initial biscuit malt sweetness more than offset by some assertive hopping with the grapefruity Citra well up there, taste of apricot too with a dry grassy/herbal aftertaste. A cracking start! 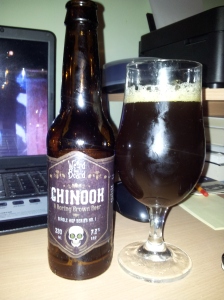 What to expect from this beer, labelled “A Boring Brown Beer”. Well. It certainly wasn’t an aroma with licorice and spice! A deep ruby brown colour, those aromas hit me straight away. Confused me, because I wouldn’t expect licorice in a beer like this. 2 malts (pale and crystal) and single hopped, more licorice in the mouth with a little barley sugar sweetness from that crystal. 7.2% abv this and some of the alcohol warmth comes through. Nice bitterness in this beer which, to me,  I can only say (boringly) tastes dark! Which works for me! And, it’s certainly NOT boring.

At 5.1% abv, this (for their pale beers) is probably about as close as you get to a “sessionable” beer! Gold coloured with lots of citrus on the nose, mostly grapefruit (Hops being Citra and Pacific gem). Nicely balanced and surprisingly easy drinking beer this, a nice marriage of citrus hops with rich tea biscuit malt. Really refreshing beer with a nice bitter dry finish. 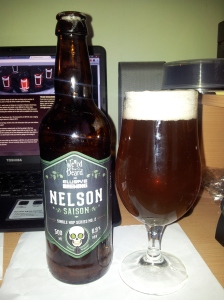 Well, this was a lively little puppy! It virtually exploded into the glass! Golden to copper coloured with abundant foamy white head. Aromas of Belgian yeast funk with some floral notes and as the beer went down, more than a hint of marmalade. A surprisingly warming beer this with some elderflower in the mouth and a spicy grassy tinge. The warmth reminded of the same feeling I get with the afterglow of a nice cognac. A nice slightly spicy finish. I’m not that big on Belgian styled beers, but it surprised me how much I enjoyed this.

To sum up. If pushed, my favourite would be the Five O’Clock Shadow. A 4.5 rating for me. The others merit a 4. Considering that they’ve been commercially brewing for less than 6 months, they’re making some cracking stuff in Hanwell!

As far as getting the beers up here, Damian has a stall at Castlefield Market some Sundays. He’s a nice bloke to talk to who is evidently passionate about what he sells. His beers are from a variety of areas, I popped down last weekend and picked up my first bottle from Cheshire Brewhouse as well as stuff from the likes of Magic Rock, DeMolen of Holland, Rocky Head from London etc…nicely priced too. I picked up a DeMolen Imperial Stout for £6.Pop down and see him. He’s a decent bloke (and that has nothing to do with the samples he offers!)

Final point, some of the best labelling I’ve seen since Magic Rock. Attractive, with detailed ingredients! Not bad at all.

Right. Time to settle to see Germany beat Iceland in the Womens Euros!

On that note….til next time!