In case you haven’t noticed, I like bottled beer. Increasingly, I find myself drawn to beers of a more local persuasion. With a small number of North West breweries stocked at the excellent Liquor Shop in Whitefield and slightly larger number stocked at Bolton’s excellent bar Great Ale Year Round, I still craved breweries from the North West that I hadn’t yet tried. Breweries like the excellent George Wright from Rainford, Prospect of Standish and others too numerous…..

On Saturday, BlackEdge Brewery of Horwich opened a bottle shop of their own, The Tottering Temple. I had been in contact via Twitter on a number of occasions with the brewers and they had a bottle kept by of their hard to find Dark Rum for me to buy. Having had a fairly light evening on the Friday, I spied an opportunity that was simply too good to pass up! So, with my 14 year old chaperone in tow…..no chance for beery mischief…..

Located on Hampson Street off Lee Lane in Horwich, it was easy enough to locate….the sign pointing to The Tottering Temple didn’t hurt either!

Entering a door which seemed to indicate a small unit, a couple of steps down and the place opened up nicely. Shelves of bottles to the left and right and a bar dead ahead. Typical me, we seemed to be first in!

Ignoring the bar for a moment, which was difficult with 3 beers priced at £2.30 a pint (!), I set to my bottle shelf investigations! Loads of breweries that I hadn’t had before. The shelves were really well laid out and labelled clearly so, if you were searching for something in particular (and they stocked it) you would find it in moments.

From Bank Top to Thornbridge, most bases covered including some of the newer micros like Squawk. I started to drool when I saw that they had their Stout, which I had heard about but seemed merely a legend, but now glassy fact! That was the first beer to hand and placed on the bar, as Richard, Mr “Adlington Beer Circle” tapped me on the shoulder. We had “conversed” on many occasions on Twitter and – if truth be told – he was one of the major reasons that I post (or try to) at 08:00 on a Saturday morning. He does like a bit of light reading!

We chatted for what seemed like ages, to the extent that I forgot to get both a half of something light and refreshing (and a drink for the “chaperone”!) A quick half of Hop was the choice to slake my conversationally derived thirst! Top bloke Richard. Got to chat with his nephew Tom and passed some tips on Manchester drinking (Tom being at Uni in Mcr and all) Richard is the creator (with techy assistance from Tom!) of an excellent website (link above) which seeks to increase footfall (quite literally!) into a number of local pubs by the creation of a number of walks that link the pubs – a simply brilliant idea in these challenging times! (Don’t think I’ll be setting one up for Farnworth QUITE yet!)

Had a number of necessarily brief, yet frequent, chats with Wayne & Shaun (the boys behind the brewery) who, through their brewing, are part of the reason why Horwich is gaining a bit of an excellent beery rep. They have a couple of pumps dedicated to their beers at the pub that serves as their “tap”, the award-winning Victoria & Albert on Lee Lane, Bolton CAMRA Branch “Pub of the Year” (popped in recently and I can see why!). BlackEdge brew a number of excellent beers with my personal favourites being the Darks, Black & Black Port (you KNOW what I’m like!). 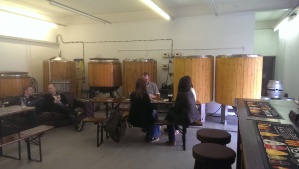 Wayne & Shaun have got this place well laid out with the 6 Bbl plant (216 gallon) at one end, with some seating and tables for the punters and even a comfy looking leather sofa (I was just TOO slow to grab that!), this was a nice place to come for a lunchtime beer and quite similar to others that I’ve been to. They have made the most of what is a fairly small venue.

Following swift halves of the excellent IPA and even better (well, it’s a dark!) Black Port grabbed whilst further yakking with Richard, I had to gather a stash to take away. Pricing is more than competitive (as I found when I got the bill!) and I was chuffed to pick up beers from George Wright, Prospect, Boggart, Marble, Westerham, Squawk as well as their own Dark Rum and Citra, an excellent and reasonably priced haul. I hadn’t even noticed the sign that mentioned 10% discount for 12 or more bottles, which I MAY have triggered!

This is a cracking shop with a really nice local based selection and “outsiders” like Thornbridge all at decent prices (I’ve got my eye on some Cheshire Brewhouse Govinda – a recent #Beergasm of mine – at £4.20!) and is well worth a look, especially if you shop at the behemoth like Tesco or Asda at Middlebrook (Bolton Reebok Stadium for non-locals). You’ll get FAR better beer here than you will at either of those!

With my 15+ bottle haul, I was being prodded by my “chaperone” who needed to get into Bolton to get a Mothers Day pressie – he’s a sweetie!

On that note….’til next time…

As has been noted by one or two people recently, I seem to write about bottles these days. I haven’t been going anywhere that I haven’t already written about I suppose. Churning over old ground – even if there are new beers to report – can get boring and despite my rambling manner, I don’t want to bore you (yes, really!)

I went out last night with the sole intention of meeting a young blogger whose posts I enjoy and who seems to share the same beery tastes as myself. That blogger being Paddy Mc Grath whose blog All Beer No Belly details his efforts to drink great beers whilst maintaining his weight (something which some of us could NEVER achieve!)

It was a fairly brief evening if hugely entertaining for my part. We met in The Victoria & Albert pub on Lee Lane in Horwich and the evening started with a pint of In Shreds by Wilson Potter. Both the aroma and taste indicated a beer which was not quite perfect, indeed it was “on the turn”. I persevered for a sip or two, giving no indication of a problem. After a moment or two, the barman approached us and asked if the beer was OK, to which I replied that it wasn’t quite right. The barman immediately took both pints and offered replacements. I must emphasise that WE didn’t complain about the beer, he was honest and knowledgeable enough to know that it wasn’t right.

I was slightly disappointed in that the reason I went to this pub was for the Wilson Potter beer, having only tried it once, that being in the brewery itself and was keen to try it in the wild. The level of service MORE than made up for my disappointment.

To be brief (not my usual habit…!), the pub is a fairly open plan affair with a some comfy seating and  4 distinct drinking areas served by a single bar. That bar has 6 handpumps (all in use) stocked mostly with Micro Brewery beers including a permanent beer from the nearby Blackedge Brewery.

I had 4 of the 6 last night. All were in excellent condition and were very tasty indeed. They were DV8 Stout from Deeply Vale of Bury (luscious, creamy, dark roasted and slightly smoky) American Pale from Blackedge (pale, fruity, very refreshing and moreish), Pint from Marble (hugely citrussy and refreshing) and a seasonal beer from Thwaites – Good Elf (fruity and spicy with warming clove).

I can fully understand why this has been Bolton CAMRA pub of the year for the last two years. With excellent service like this and such an excellent selection of well-kept beers, I will most certainly be back!

A huge thanks to Paddy for a) ensuring that I didn’t drink alone and b) for his most excellent company.

On that note….’til next time…

Error: Twitter did not respond. Please wait a few minutes and refresh this page.