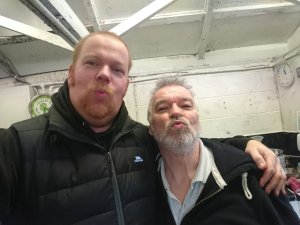 (The stuff of nightmares?)

That thing where your morning planning goes all to shite. Then gets much better? That.

There are only 3 events I will try to arrange collab brewdays for.

The first two kind of go without saying (my favourite beer festival and ISBF).

The Bolton fest is held in my local area. It’s my local CAMRA branch. Some friends are intimately involved.

And it is – quite simply – the best CAMRA beer festival (for me). Small, relatively intimate and with little of the padding you often get at beer dos organised by Campaign branches. In short, a fabulous selection of beer.

Held at The Ukrainian Club on Castle Street every April, it’s become a personal highlight. Unmissable. And this year, I thought I’d try to contribute. By getting two of my favourite breweries to do something special.

I was a little late – ask The Daughter Thing – and had to hastily rearrange my travel plans, hence the hired help…. Bit overdressed mind.

Dark Malts. Orchard fruity hops (Calypso). Belgian yeast. The hops should accent the esters from the Belgian yeast making this a special thing

I’m partial to a walk on the darkside and there were some beautiful roast aromas greeting me as I arrived. Just in time to add the late additions of Calypso. (I missed the early addition of Magnum. Damn)

And help clean up.

Rumours* started to circulate about an “afterparty”….

This beer will be rich, roasty and with that little fruity something from the Calypso hops and Belgian yeast. It promises to be special. Really special. And at about 7% abv, almost sessionable!

Aside from being for one of my very favourite festivals, the pleasure here is being with two of my favourite breweries and beer people.

Stuart Neilson at North Riding Brewery has been building a reputation for consistent excellence both in his hoppy pales and his luscious, sumptuous Stouts and Porters.

He has been either wholly responsible for – or collaborated on – some of my favourite beers of the last few years. Including a collab with Malcolm which was my Beer of 2017. Fudge Brownie Stout.

Malcolm Bastow at Five Towns has won “Beer of the Festival” 3 times out of 4 at ISBF. That is all you need to know.

For a less than a 400 litre brewery based in a garden shed?

Anyone who managed to try “Always Crashing In The Same Car” at St Sebastian’s, just knows. It was One. Special. Beer.

It’s always special when these two work together. This beer promises to be no different.

Over this side of the Pennines, the first (and likely only) place you will get this beer, “From Kether To Malkuth” will be at this belting little beer bash, at Bolton Ukrainian Club. On 26th April. For three days.

But it won’t last that long. THAT I promise you.

*And – just for the record – the lamb dinner was exquisite. Melt in the mouth gorgeousness, with ace Yorkshire puds (Stu likes a Yorkshire pud….).

So good was it, that Stu will now only come to collab on Sundays….

Now THAT’S a beer you won’t want to miss!

Looks like we’ve got a Dark Belgian Muffin on our hands!